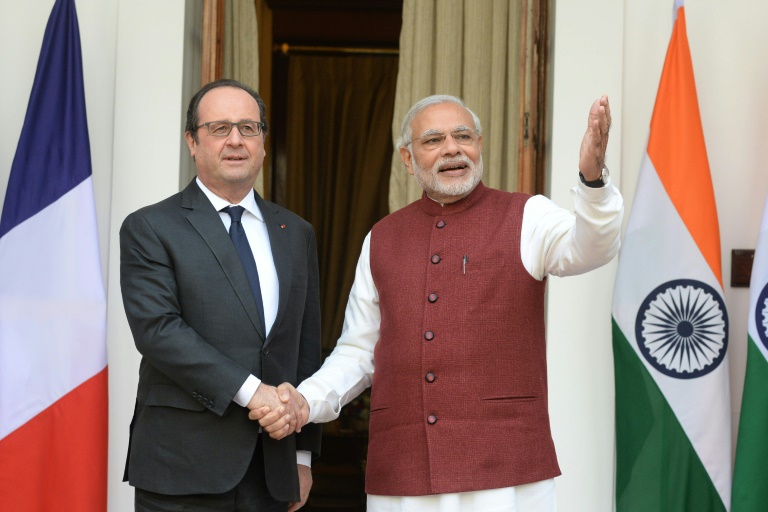 French President Francois Hollande vowed Monday not to weaken his resolve against terrorism as he held talks with India’s leader on security cooperation and a long-delayed defence deal.

Hollande said he and Indian Prime Minister Narendra Modi had agreed to step up cooperation on counter-terrorism after deadly attacks on Paris in November that recalled the 2008 assault on Mumbai.

But they failed to reach a final agreement on India’s long-delayed purchase of 36 Rafale fighter jets from the French company Dassault.

The French president said a new video which threatens countries of the US-led coalition fighting the Islamic State group would only strengthen France’s resolve which was tested by November’s deadly attacks in Paris.

“These odious provocations only serve to further increase the resolve that we have, that I have, to protect French people through the decisions that I have taken… but also to hit, and hit again, this organisation that threatens us and kills our children,” he said.

Hollande made the comments after talks with Modi that focused on security cooperation after the Paris attacks.

Modi also spoke of the two leaders’ joint resolve to increase security cooperation, recalling a deadly raid earlier this month on an Indian military base near the Pakistan border.

“President Hollande and I have agreed to scale up the range of our counter terrorism cooperation in a manner that helps us to tangibly mitigate and reduce the threat of extremism and terrorism to our societies,” he said.

Modi was speaking alongside the French president, whose visit had raised fresh expectations that the Rafale deal would be finalised after years of tortuous negotiations.

A joint statement said the leaders welcomed the conclusion of an intergovernmental agreement on the purchase, but that “some financial issues” remained outstanding.

A senior French official told reporters on Sunday the two sides were still haggling over the price, which experts say could reach around five billion euros ($5.6 billion).

One sticking point is Delhi’s insistence that arms makers invest a percentage of the value of any major deal in India.

Hollande will be chief guest at Tuesday’s Republic Day parade in New Delhi, an invitation Modi extended to show solidarity after the assault on the French capital which killed 130 people.

Earlier, he said the extremist threat weighed as heavily on France as on India, recently hit by the deadly attack on a military base near the border with Pakistan.

The 17-minute video put out by the IS group describes the Paris attackers as “lions” who “brought France to its knees” and urges Muslims in France to rise up against the country’s leaders.

It features the heads of Hollande, French Prime Minister Manuel Valls and British Prime Minister David Cameron with targets superimposed on them, and purports to show nine jihadists involved in November’s slaughter.

“Nothing will deter us, no threat will make France waver in the fight against terrorism,” Hollande told reporters.

“These images only serve to discredit the perpetrators of this crime.”

Hollande and Modi will sit together at the annual parade, a pomp-filled spectacle of military might which includes columns of Soviet-era tanks.

On Monday the atmosphere was distinctly more down-to-earth as the two leaders took the metro for their journey to the satellite city of Gurgaon.

There, they will lay the a foundation stone at the new headquarters of the International Solar Alliance, a 121-nation group launched by Modi at the recent Paris climate conference to expand affordable solar power.

Hollande has expressed hope that some of the French businesses travelling with him will be at the forefront of the solar energy push.

The leaders are expected to announce a pact between France’s CNES and India’s ISRO space agencies, for a joint satellite dedicated to climate change research.

India, the world’s third biggest emitter of greenhouse gases, pledged in the lead-up to the Paris conference to cut carbon intensity — the amount of pollution per dollar of GDP — by up to 35 percent by 2030.

But it still plans to double its coal production by 2020 to provide electricity to the 300 million Indians who still do not have it.