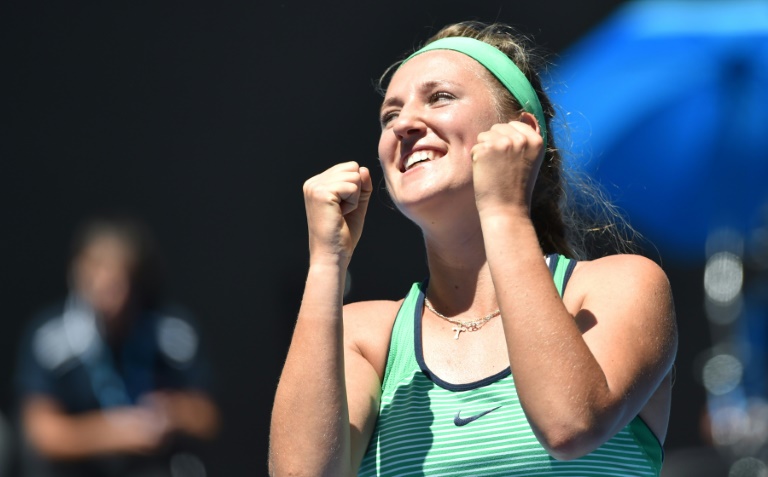 Former world number one Azarenka proved too strong for Czech Barbora Strycova on Rod Laver Arena, storming through 6-2, 6-4 to set up a last-eight clash with Angelique Kerber, who beat fellow German Annika Beck 6-4, 6-0.

Azarenka, the 14th seed who won at Melbourne Park in 2012 and 2013, has a 6-0 record over Kerber, including in the Brisbane International final this month, making her a hot favourite to keep her title run going.

“I’m looking forward to it. She’s such a fighter and such a nice person,” said the Belarusian, looking ahead to the test on Wednesday. “I’ll just give it my best and I’m sure she’ll do the same.”

Seventh seed Kerber powered past Beck to reach the quarter-finals for the first time and knows she has a formidable task ahead against a player who has won each of their encounters dating back to 2012.

“I had tough matches against her in the past. I never won against her right now, but that will be a challenge,” she said.

“It’s a new one, it starts from zero, and I know what’s coming from her. I will try to be aggressive and try to go and win the match.”

“Goodness gracious,” said Konta, who will next face Zhang. “Mentally, emotionally and physically I left it all out there on the court.”

The only other British women to get as far were Virginia Wade, who won in 1972, and Sue Barker who made the semis twice.

She had lost all 14 of her previous Grand Slam matches before this year’s tournament and was mulling retirement, but she has now won four in a row after beating the American 3-6, 6-3, 6-3.

It was devastating finale for Keys, last year’s semi-finalist, who needed treatment on her upper left leg which hampered her movement. She gamely carried on but was clearly in pain, with tears on court.

“It was so difficult to concentrate because I could see she was in pain.”

Azarenka, 27, has been in the zone at Melbourne Park, dropping just 11 games in four matches as she zeroes in on a return to the top after battling injuries for the past two years.

She went into the Strycova clash with a clear advantage, whipping her on all four of their previous meetings, including at the last two Australian Opens.

But it wasn’t straightforward against the Czech, who stunned third seed Garbine Muguruza in the last round.

“She is such a tough opponent. I’m just happy I went through. I played smart, aggressive and really took my opportunities,” said Azarenka.

Melbourne Park has been a happy hunting ground for Azarenka, who has now made the quarters or better five times in her last seven attempts.

Kerber, who had a stellar 2015 but underachieved at the majors, eased past Beck who fell apart in the second set after pressing her compatriot hard in the first.