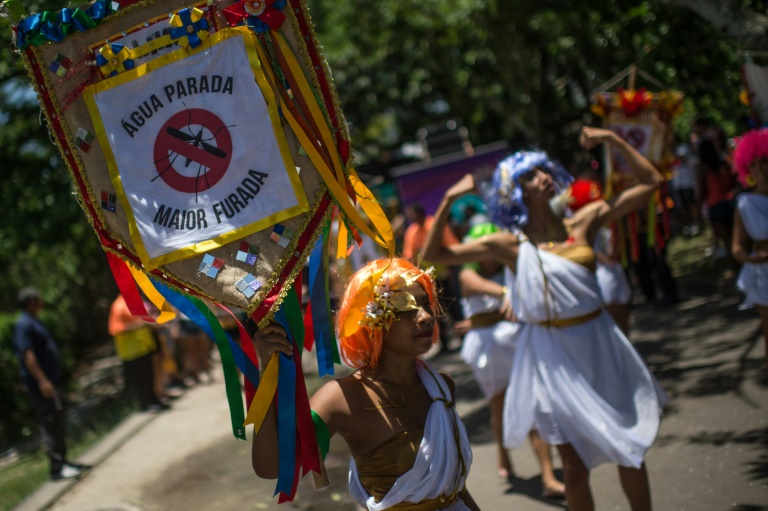 Rio de Janeiro carnival goers celebrated the coming Olympics on Saturday and even turned fear of infection from Zika-carrying mosquitos into an excuse to party.

Participants at one of the many street parties popping up ahead of the official carnival, which starts February 5, honored the city’s hosting of the Summer Games in six months by dressing in ancient Greek garb.

Some came as Dionysus, others as Aphrodite and Apollo. Rio will be the first South American city to host the Olympics and with the country facing deep recession, a vast corruption scandal and an impeachment attempt against President Dilma Rousseff, Brazilians can’t wait to lighten the gloom.

“We picked the Rio Olympics theme for the party because this year our magnificent city Rio will host the Games for the first time,” said Chico Nogueira, coordinator of the pre-carnival event known as a “bloco.”

“This is the veritable Olympus of the gods here,” he said, looking around at the samba dancers. “The gods of Rio are mixing with the gods of the whole world.”

The bloco also had a serious health message for the carnival, now in its warm-up phase ahead of the five official days and their famously elaborate parades.

Authorities in Brazil are struggling to combat the rapid spread of the Zika virus, which is carried by mosquitoes and is believed to cause serious defects among babies born to women infected while pregnant.

Those fears are accelerating with the onset of carnival and mass tourist travel. So Saturday’s “bloco” did its bit to aid the anti-mosquito war, including with a song advising against leaving stagnant water around.

“If the water stops, the larvae come, the larvae give birth to the mosquito,” one verse went. “Chase away Zika!”

Condoms were handed out and a pregnant woman danced in a Wonder Woman costume.

“This illness is very serious and everyone must take part in fighting it,” Nogueira said. “Everyone must unite against the mosquito.”

“I’m very worried,” said Paula Couto de Oliveira, 35, who is 19 weeks along and was attending the “bloco.”

“Every few hours I put repellant on, but I’m trying not to go crazy or become paranoid and not going out of the house,” she said. “But I’m avoiding dark clothes because they attract mosquitos.”