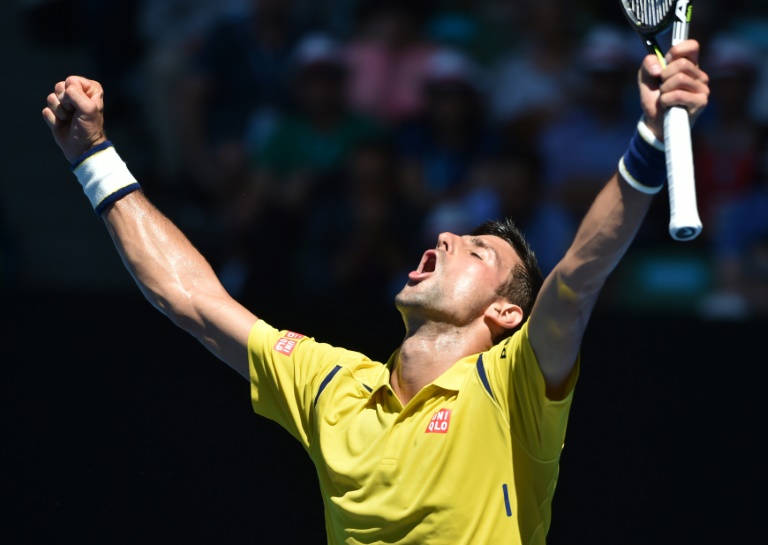 Novak Djokovic called his win over Gilles Simon a “match to forget” after he clocked up an embarrassing 100 unforced errors before scraping into his 27th consecutive Grand Slam quarter-final at the Australian Open on Sunday.

It was a gruelling win for Djokovic, whose tennis was uncharacteristically ragged before he finally subdued the dogged French 14th seed in the Rod Laver Arena thriller.

“Actually, it gives me great joy to know that I can’t get worse than that, than what I played today,” he smiled.

“I was obviously pleased to win the match, but in terms of the performance itself, I haven’t done well at all.

“Gilles Simon is one of the best counter-punchers on the tour and he likes to play long matches.

“I knew what to expect on the court. But I honestly didn’t expect to make this many unforced errors. It’s a match to forget for me.”

The statistics make uneasy reading for the proud world number one.

An astonishing 100 unforced errors, split between his forehand and backhand, prompted the Serb to say: “I don’t think I’ve had any close number to a hundred. But again there is a first time for everything.”

Djokovic also blamed a “brain freeze” for continually trying to make drop shots, which either found the net or were run down by the athletic Simon.

“Sometimes you have a brain freeze, if I can call it that way. That’s what happened to me many times with those drop shots,” he said.

Looking ahead to his match with Nishikori, Djokovic dismissed any concerns about his physical condition after Sunday’s marathon.

“I’ve been in these situations before. The good thing about Grand Slams is that you have a day off in between, which gives you enough time,” he said.

“I’ve had worse situations where I had much less time to recover after long matches. So I’m sure I’ll be fine.”

In making the quarter-finals for the 27th straight Grand Slam, Djokovic equalled Jimmy Connors in second place for the most consecutive last-eight appearances at the majors.

It will be the Serb’s 35th overall Grand Slam quarter-final appearance, and he has reached the last eight in Melbourne for a ninth consecutive year.

It was also Djokovic’s first five-setter since beating South Africa’s Kevin Anderson in the fourth round of Wimbledon last year.

While Djokovic won his 10th straight match over Simon, he only did so after a monumental struggle, losing his serve four times and often casting anxious looks over to his coach Boris Becker in the player’s box.

The five-time Australian Open champion’s composure was tested by the counter-punching Frenchman, who was content to keep in long rallies and pounce on any errors.

The sets were long drawn-out affairs as Simon patiently kept the ball in play in a game of cat-and-mouse with Djokovic, who often would hit out or find the net to end the point.

“From experience, it’s not a very pleasant feeling when you’re not playing well,” he said.

“But certainly it’s a good feeling when you win not playing well. So I’ll try to take that as an incentive for the future.”