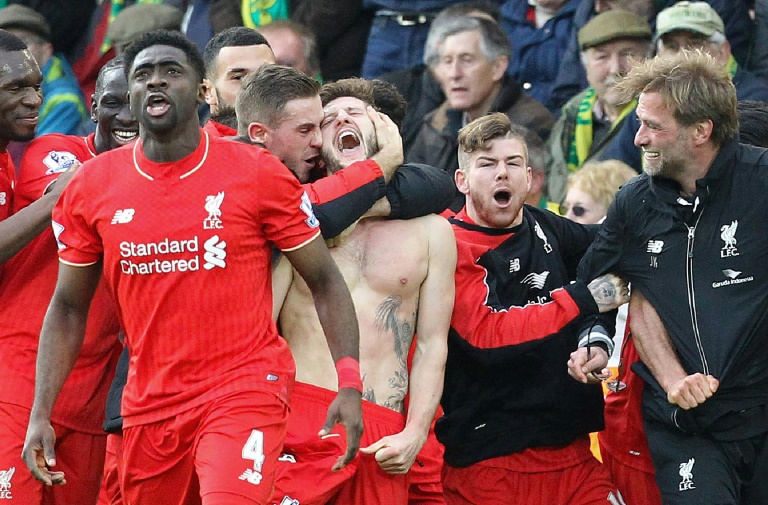 Jurgen Klopp admitted his heart was palpitating after Liverpool stole the points in dramatic fashion in their sensational 5-4 win over Norwich at Carrow Road.

Klopp’s side went ahead through Roberto Firmino but Norwich hit back with goals from Diemerci Mbokani, Steven Naismith and a Wes Hoolahan penalty.

The Reds responded superbly to draw level through Jordan Henderson and another Firmino goal before James Milner put them ahead with 15 minutes remaining.

But that set the stage for Saturday’s heart-stopping finale, which left the always emotional Klopp beside himself with frustration and then jumping for joy.

The Liverpool boss was crestfallen when Sebastien Bassong fired home to equalise for Norwich in stoppage-time, but just seconds later he was sprinting down the touchline to join his players in a jubilant huddle after Adam Lallana scored with virtually the last kick of the game.

“Until now my heart has been very stress resistant,” Klopp said. “I have had a few games in my life similar to this but not with this happy end. I have not often had a 5-4 win.

“At the end we can be really happy with nearly everything, especially three points after almost a draw. A draw would have been deserved for both teams.

“It was spectacular, wild, good football. It was an impressive fightback to be honest. It was really good.”

Klopp’s relief was so overwhelming that he laughed off having his glasses broken in the celebrations following Lallana’s goal.

“I have had had this before (smashed glasses),” the former Borussia Dortmund manager added.

“They are in a museum at Dortmund because we won first time against Bayern Munich. And Nuri Sahin broke my glasses â€“- and today it’s Adam.

“I won’t be making Adam pay for the glasses. Usually I have a second pair but it’s really difficult to look for glasses without glasses.”

Klopp could have been forgiven for wishing his eye-sight had been impaired earlier as Liverpool’s defensive horror show made for difficult viewing.

Yet, despite conceding four goals against one of the league’s lesser lights, Klopp claimed Liverpool were improving at the back.

“It’s not easy to create chances against us. It’s very frustrating in the end of course. Today we scored five,” Klopp said.

“It will make me sound crazy but we defended better today. Now we have to solve this problem. I am not happy with the situation for sure.”

Meanwhile, Norwich manager Alex Neil voiced his frustration at his side’s even more porous defence, after conceding 14 goals in their last four matches.

“We managed to score four goals at home and that should mean three points,” Neil said.

“The amount of goals we are conceding is concerning.

“It was frustrating because with the forward play we had we should have come away winners.

“All your hard work goes to waste. They did all the hard work to get us to 3-1 so it is extremely frustrating.”

Although outwardly calm, Neil admitted he was furious inside and hoped his players would be too as they try to pull clear of the relegation zone.

“I’m angry, extremely angry, the players should be too. They should be feeling the pain,” he said.