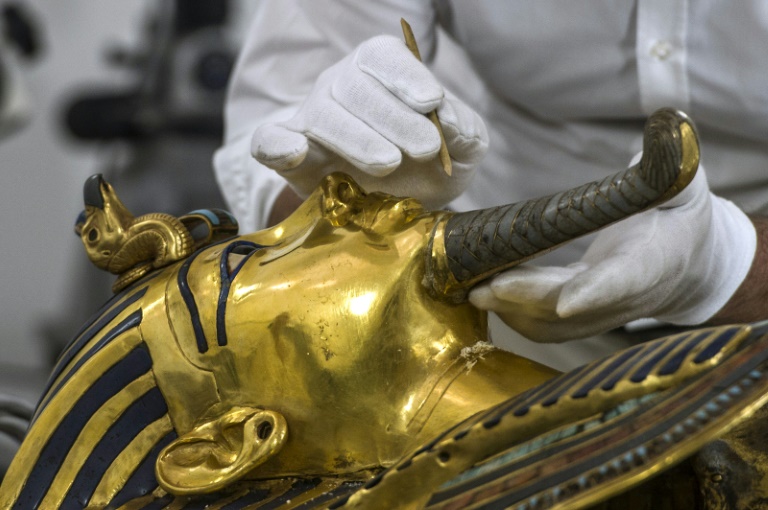 Eight employees of Cairo’s Egyptian Museum will face a disciplinary hearing over a botched repair of the golden mask of King Tutankhamun, officials said on Sunday.

The 3,300-year-old funerary mask of the boy pharaoh was damaged when its beard was knocked off in August 2014 as museum staff removed it from its display case to repair the lighting.

In a hurried attempt to fix it, the workers applied too much epoxy glue, leaving a visible crust on the relic.

The museum’s former director and ex-chief of restoration “will face an emergency disciplinary hearing” along with four restoration experts and two workers, said Mohamed Samir, spokesman for the administrative prosecution.

The prosecution said a probe showed the eight guilty of “gross negligence and blatant violation of scientific and professional” rules that must be followed when dealing with a relic.

The eight had been removed from their jobs after the botched 2014 repair work, pending the outcome of the investigation.

They “handled the mask with extreme recklessness,” Samir said.

The solid gold mask of the enigmatic boy king is one of the crown jewels of the Egyptian Museum, which also houses the mummy of Pharaoh Ramses II.

The relic weighs 11 kilos (24.2 pounds) and is encrusted with lapis lazuli and semi-precious stones.

Tutankhamun is believed to have died more than 3,300 years ago when he was 19 years old.

His nearly intact tomb, which included a gold coffin and mask, was discovered in 1922 by English archaeologist Howard Carter in Luxor’s Valley of the Kings.

The knocked off beard was reattached to the funerary mask by German conservator Christian Eckman after two months of work.

The restoration included a 3D scan of the mask as well as a process of warming the relic to remove the glue used by the workers in their attempt to fix the damage.

On December 16 the restored mask was put back in its display case in the museum near Cairo’s Tahrir Square.

When Carter discovered the Tut treasure, the ceremonial beard was already loose and he himself removed it for the first time, Eckmann told reporters in December.