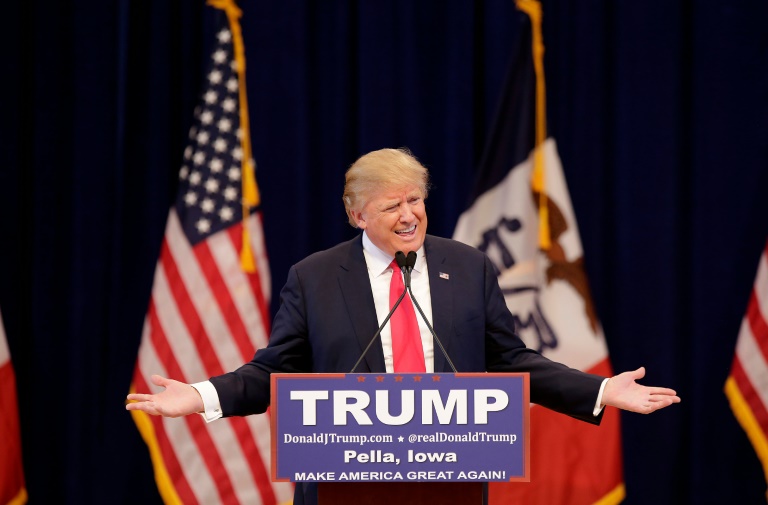 One might be forgiven for forgetting that there are 12 Republicans still in the White House race — for now, it’s a two-man show.

The battle between billionaire frontrunner Donald Trump and maverick Senator Ted Cruz is the main event for conservatives, who are torn with nine days to go before the Iowa caucus.

The two candidates are dominating the polls ahead of the February 1 caucus in the small heartland state, the first to vote in the US presidential nominations process, and both are due to make appearances here Saturday.

At the start of January, several polls had Cruz in first place.

Just a few months ago, in September, the 69-year-old real estate tycoon Trump and the 45-year-old Texas senator joined forces for a rally against Washington’s nuclear deal with Iran. They refused to attack each other until just recently.

But Trump now calls his chief rival “a nasty guy” and a hypocrite for slamming New York values while taking money from donors in the Big Apple.

The two men are vying for support from the same people: the voters farthest to the right of the political spectrum — the target for the primaries.

On Saturday, Trump started the day in Sioux Center in northwest Iowa.

“Ted has a lot of problems. Number one, Canada — he could run for the prime minister of Canada, and I wouldn’t even complain because he was born in Canada,” Trump said, repeating that Cruz’s birthplace could disqualify him from the race, though many experts say the opposite.

Cruz, meanwhile, was joined on the Iowa trail Saturday by conservative television and radio host Glenn Beck, who offered his official endorsement.

“I wouldn’t do his show so he got very hostile,” Trump noted, praising his loyal supporters.

“I have the most loyal people. I could stand in the middle of Fifth Avenue and shoot somebody and I wouldn’t lose any voters, okay?”

Cruz has portrayed Trump as an unscrupulous businessman who favors seizing private property so his casinos can thrive. The senator accuses the tycoon of being an opportunist with no real attachment to conservative values.

In part, Cruz owes his success to his intransigence in the Senate, where he has steadfastly refused to make any compromises with Democrats.

This ideological fervor should in theory help him win over evangelical Christian voters — who make up about 60 percent of the Republicans who cast ballots in 2012.

Evangelicals are very conservative on social issues, opposing abortion and same-sex marriage, and defending the role of religion in society. They helped boost Mike Huckabee and Rick Santorum to victory in Iowa in 2008 and 2012.

“It would be hard for a Republican in Iowa to win without at least some support from them,” Dennis Goldford, a professor of political science at Drake University in Des Moines, told AFP.

“Ted Cruz is trying to prove that you can win with them alone.”

The rest of the Republican party has watched amazed, powerless and divided as the anti-establishment candidates have powered along, with party leaders seemingly unable to contain them.

Traditional Republican candidates like Jeb Bush, whose father and brother have both served as president, have fallen by the wayside in the polls.

This week, the National Review, a venerable conservative magazine, launched a special issue “Against Trump,” calling on fellow Republicans to reject his candidacy.

“Trump is a philosophically unmoored political opportunist who would trash the broad conservative ideological consensus within the GOP in favor of a free-floating populism with strong-man overtones,” it said in a biting lead editorial.

“There are understandable reasons for his eminence, and he has shown impressive gut-level skill as a campaigner. But he is not deserving of conservative support in the caucuses and primaries.”

The broadside triggered an angry response from the Republican National Committee, which disinvited the National Review from being a partner of the party’s candidate debate on February 25.

Some party stalwarts however have welcomed Trump.

They seem to think Trump’s cunning opportunism will be an advantage come November, because the tycoon will have no problem changing up his positions to attract wider support.

Senior Iowa Senator Chuck Grassley — who is well respected in the party — took part in Trump’s second appearance of the day in Pella.