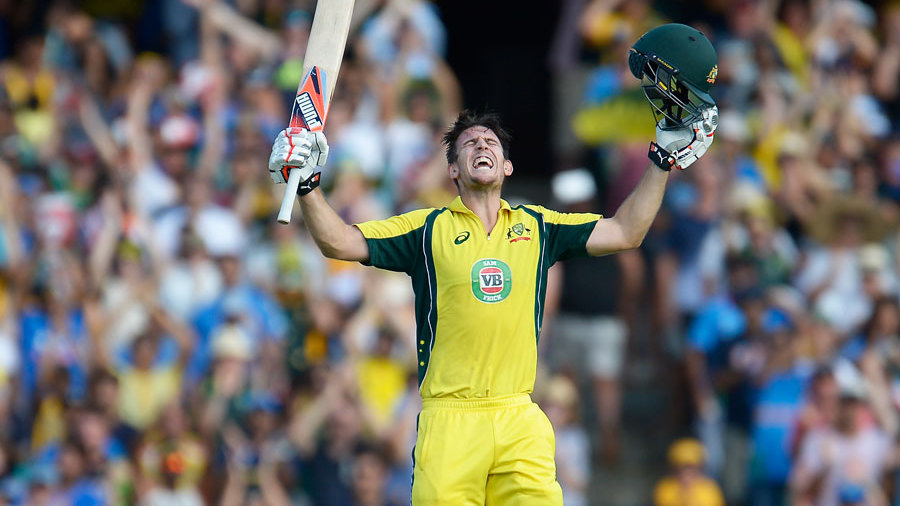 Sydney: Indian bowlers’ horrendous run Down Under continued as Australia rode on centuries from Mitchell Marsh and David Warner in another dominant batting display to pile up 330 for seven in the fifth and final cricket ODI here on Saturday.

Chasing a 5-0 whitewash, Australian looked on course for more but for the last two overs from debutant Jasprit Bumrah and Ishant Sharma, which got them just seven runs in an inconsequential match at the Sydney Cricket Ground.

Opener Warner laid the foundation with 122 off 113 balls, while Marsh remained unbeaten on a brisk 102 off 84 deliveries after India skipper Mahendra Singh Dhoni asked the home team to take first strike.

This was the fourth time in the series Australia crossed the 300-plus mark, and Marsh’s maiden ton in this format.

Australia lost last match’s centurion Aaron Finch in the first over to Ishant, following which Warner shared a half-century stand with the in-form skipper Steve Smith.

Smith’s dismissal to Bumrah, his maiden wicket, was followed quickly by those of George Bailey and Shaun Marsh.

Warner then steadied the ship by putting on a valuable 118 runs for the fifth wicket with Marsh at just seven runs an over.

Having completed his century, a tired-looking Warner got out while trying to slash Ishant, managing to give a catch to an agile Ravindra Jadeja.

Then came another crucial partnership of 85 runs for the sixth wicket between Marsh and Matthew Wade (36 off 27 balls), paving the way for another big total by the home side that has already chased down two 300-plus totals in the series so far.

The visitors made two changes, bringing in Manish Pandey for the injure Ajinkya Rahane, as also handing out a surprise debut to Bumrah, the youngster not even officially included in the ODI squad.

He had arrived early to join up the T20 squad and was afforded this chance as Bhuvneshwar Kumar suffered a hairline fracture in his left thumb in Canberra, ruling him out of the T20I series as well. Australia too made two changes, with Shaun Marsh coming in for Glenn Maxwell and Scott Boland for Kane Richardson.

Earlier, Warner and Finch (6) got the proceedings underway, with Indian bowlers getting on top for the first time since the Perth ODI as Ishant (2-60) trapped Finch LBW in the very first over. Smith (28) put on 58 runs with Warner quickly even as Bumrah (2-40) was introduced into the attack in the 8th over and then Rishi Dhawan (1-74) was brought on in the 11th over. The dual moves worked as Australia lost quick wickets before reaching the 100-mark in the 19th over.
(REOPENS FGN 7)

Bumrah got his maiden international wicket as Smith was caught at midwicket in the 12th over, off a ball that jumped high on him. At the other end, Dhawan got rid of Bailey (6) in the 15th over as Australia were under considerable pressure at that stage. 78/3 became 117/4 in the 22nd over, as Shaun Marsh (7) was run-out, the ball deflecting off Gurkeerat Mann (0-17).

But Marsh then joined Warner in the middle, and the duo added important runs to lift Australia from the hole they were in. In fact they did not curb their free scoring as the run-rate continued unabated with the 200-mark coming up in the 34th over, even as Warner had reached his century off 100 balls in the 36th over.

While Ravindra Jadeja (0-46) bowled with control, Umesh Yadav (1-82) proved to be expensive once again.

The partnership was then broken in the 39th over, Warner caught at backward point off Ishant, and Australia were placed at 249/5 in the 40th over. Marsh then took over the finishing responsibilities and was given able support by Matthew Wade (36) as the duo pushed the score past the 300-mark in the 46th over, putting on 85 runs for the 6th wicket.

Both Wade and James Faulkner (1) were dismissed in the death overs in a bid to accelerate further, but Marsh stayed put long enough to score his maiden international hundred off 81 balls in the final over of the innings. In doing so he joined his father Goeff Marsh and brother Shaun, both of whom had also scored their maiden ODI hundreds against India as well.