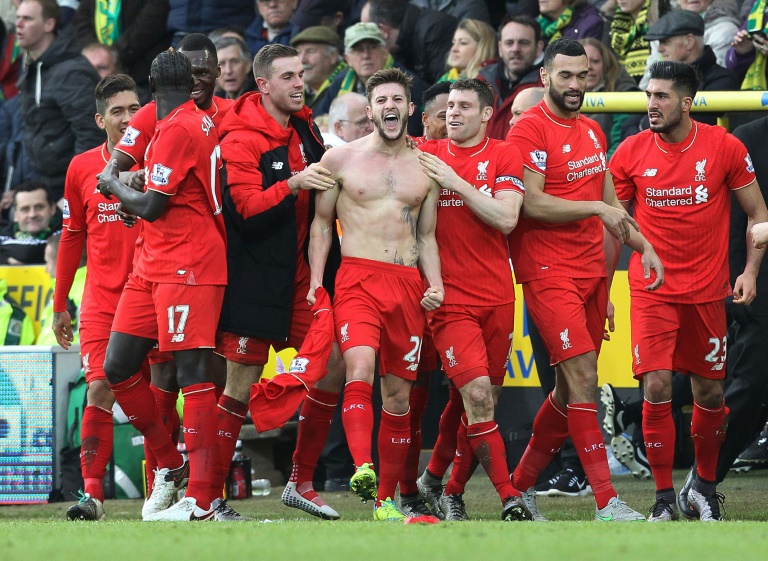 Adam Lallana scored a 95th-minute winner as Liverpool came from behind to beat Norwich City 5-4 in an extraordinary ding-dong Premier League battle at Carrow Road on Saturday.

Ex-Everton man Steven Naismith helped Norwich take a 3-1 lead and although they fell 4-3 down, Sebastien Bassong slammed in a 91st-minute equaliser, only for Lallana to have the final say in a frantic finale.

Naismith was making his debut after his Â£8.5 million ($12.1 million, 11 million euros) move from Everton and his 41st-minute goal put Norwich 2-1 up after Dieumerci Mbokani’s back-heel had cancelled out Roberto Firmino’s opener.

Wes Hoolahan’s 54th-minute penalty, after Alberto Moreno had fouled Naismith, made it 3-1, but goals from Firmino, Jordan Henderson and James Milner put Liverpool ahead before the stoppage-time drama unfolded.

Naismith was one of four new signings in Norwich’s match-day squad, with Ivo Pinto, signed from Dinamo Zagreb, also making his debut at right-back, while Timm Klose and Matt Jarvis were on the bench.

Norwich’s new defenders have been bought to try and shore up the leakiest defence in the top flight, but that went to pot in the 18th minute as Liverpool went ahead.

Jordon Ibe’s performance in Liverpool’s 3-0 FA Cup win over Exeter in mid-week was enough to get the nod ahead of Lallana and lead the attack in partnership with Firmino.

The duo combined neatly after skilful work from Moreno, before Miner slipped Firmino through to beat goalkeeper Declan Rudd with a low shot off the far post.

Norwich were determined to meet fire with fire, keeping up with their pressing game, and it bore fruit in the 29th minute.

Liverpool failed to clear their lines and when the ball fell to Mbokani, who had his back to goal, he cleverly defied the close marking of Mamadou Sakho to back-heel past Simon Mignolet from six yards.

The visitors’ defensive shortcomings were exposed again 12 minutes later when Hoolahan picked out the angled run of Naismith, who arrowed a low shot across Mignolet and inside the left-hand post.

Moreno’s moment of madness came eight minutes into the second half when he slid in on Naismith near the byline on the Norwich right.

He got away with it, but then inexplicably had another go at Naismith from behind and conceded the penalty.

Hoolahan beat Mignolet from the spot, going straight down the middle, to net his third goal of the season.

They were rewarded a minute later when Nathaniel Clyne found space down the right flank and crossed for Firmino to flick on to captain Henderson, whose finish was emphatic.

Liverpool drew level with another sweeping move in the 63rd minute, which left Norwich exposed at the back.

Henderson’s cross from the left found Firmino, who drew Rudd from his line before knocking the ball over him and into the net for his fourth goal in three league games.

Norwich’s propensity to harm themselves continued as skipper Russell Martin gifted the ball to Milner with a needless back-pass from near the halfway line.

Milner ran through unchallenged and took a step to his right before slotting past him to put Liverpool ahead.

The Canaries thought they had snatched a point when Bassong thumped a low drive in from 20 yards in time added on.

But four minutes later Lallana pounced on a loose ball as Norwich’s back line failed to clear, driving a left-foot volley into the ground and into the net to send Klopp gambolling down the touchline.