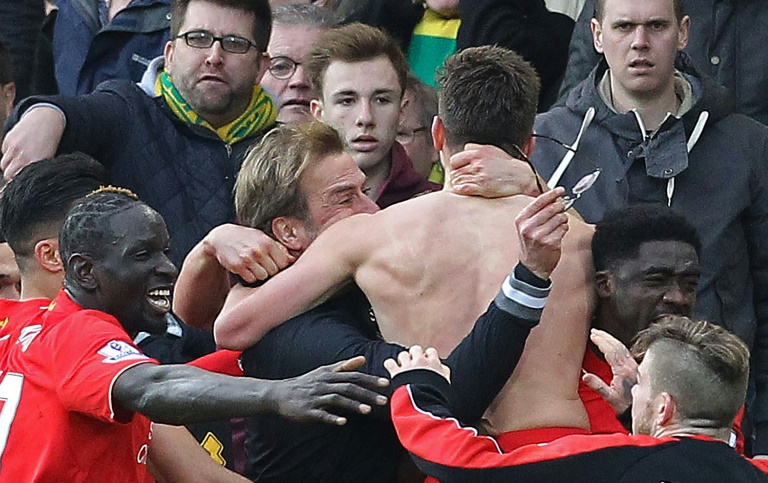 Lallana slammed home deep into stoppage time at Carrow Road, four minutes after Sebastien Bassong had brought Norwich level, at the end of a frantic Premier League game in which Liverpool fought back from 3-1 down.

The England midfielder ran over to celebrate with Klopp on the touchline and with his team-mates piling in, the German’s spectacles were knocked from his nose.

“I usually have a second pair of glasses, but I can’t find them because it’s hard to find glasses without glasses!” Klopp joked afterwards.

After Roberto Firmino had put Liverpool ahead from James Milner’s pass in the 18th minute, Norwich hit back with a Dieumerci Mbokani back-heel, a goal by debutant Steven Naismith and a Wes Hoolahan penalty.

But goals from captain Jordan Henderson and Firmino brought Liverpool level and although Milner’s 75th-minute strike was cancelled out by Bassong’s drive, Lallana had the final say.

“Of course we were lucky, but we were not too lucky when they equalised in overtime,” Klopp said.

“It is very emotional. We are in the middle of the chaos and react. Sometimes we know what we are doing, sometimes we don’t. The game is enough of a story.”

Norwich manager Alex Neil said: “It is really frustrating. We worked really hard this week and we put in a good performance, but made it a bit of a rabble with our defending.”