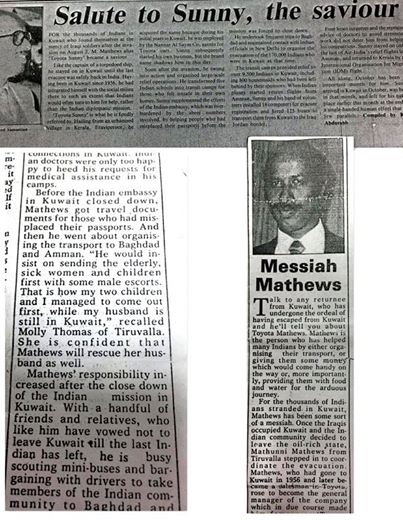 Airlift made an entire generation aware of the biggest and successful rescue operation carried out of India. Around 1, 70,000 Indians were evacuated from war-torn Kuwait in the 1990s back to India.

Even though it was an operation worth the mention, but not much is known about the actual heroes of the operation. According to Raja Krishna Menon the director of the film there were two men – Sunny Matthews and Vedi had formed an official committee to carry out the operation.  Akshay Kumar’s character (Ranjit Katyal) is the amalgamation of the two.

One day before the release of the film, the granddaughter of one of Sunny Matthews wrote an emotional Facebook post about her grandfather. She remembered him as a great icon.

“Today ‘Airlift’ releases, a movie based on the largest civil evacuation (Indians based in Kuwait) during the Iraqi invasion in 1990. Akshay Kumar’s leading role is based on a few people such as my grandfather, who facilitated the evacuation of nearly 170,000 Indians and brought them safely home. My grandfather stayed through the turmoil of it all and put his life at risk to secure safety for all those he could help. He is a great man and through all his success has always stressed on the importance of humility, gratitude and love, especially to those not so fortunate. An inspirational icon who has touched the hearts of many and lived a life of service. I wish I could even be half the man he is. He may not have many years left but through this movie, his legacy will live on and for that I will be forever proud.”