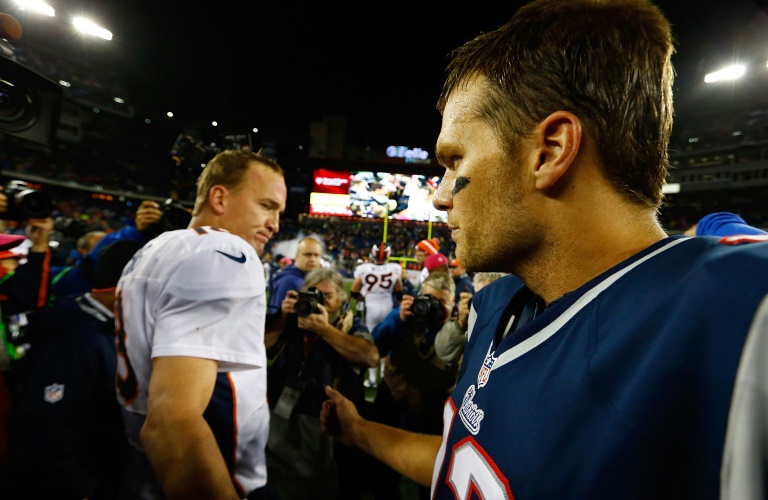 Iconic NFL quarterbacks Tom Brady and Peyton Manning meet for the 17th time in their storied careers Sunday with a Super Bowl berth at stake in what could be the final edition of their generation-defining rivalry.

Brady will lead the defending Super Bowl champion New England Patriots into Denver to face Manning’s Broncos in the American Conference championship game. The winner will face either Carolina or Arizona in Super Bowl 50 next month.

While Brady owns an 11-5 edge in the all-time rivalry with Manning, they are 2-2 in playoff matchups and 3-3 when Brady and the Patriots are not playing at home.

“I’ve got great respect for the way he plays the position and the way he takes care of himself physically and always answers the bell every single season, every single week,” Manning said of Brady.

“He has just been an incredible player and incredible leader for his team,” Brady said of Manning. “There have been so many games as a team he has been a part of that they have won. So you can see that he leads a great team.”

It’s the NFL’s equivalent of the epic man-to-man matchups on the order of the NBA’s Magic Johnson versus Larry Bird, boxing’s Muhammad Ali versus Joe Frazier, golf’s Arnold Palmer and Jack Nicklaus and Bjorn Borg versus John McEnroe in tennis.

Brady has four Super Bowl crowns to one for Manning and six Super Bowl appearances, twice as many as Manning, although twice Brady has lost to Peyton’s little brother, Eli Manning, and the New York Giants in the NFL title spectacle.

And while Brady has the Hollywood good looks and supermodel wife Gisele Bundchen, Manning has become the NFL’s most marketable endorsement star, an everyday pitchman for television commercials unafraid to poke fun at himself.

The two spotlight rivals are friends, have dined together and with their families and supported each other through injuries. Their mutual admiration is no surprise.

“He’s an incredible player, an incredible leader for his team,” Brady said of the elder Manning. “He’s a great passer. He’s so accurate, throws on time, knows where everybody on the field is, offensively and defensively. He knows how to look defenders off and put the ball in the right location so those guys can catch and run with it. I think he’s just a great pocket passer.”

“It has been a great honor and privilege to compete against him that many times in the past 16, 17 years he and I have been in the league together,” Manning said. “I know how hard I’ve worked to play this long so when I look across at the New England Patriots and see that Tom Brady is their quarterback, I just know how hard he’s worked, as well, and to play as well as he has over the course of his career, and the success that he’s had and the team success.

“I just have a lot of respect for him and he has earned that respect.”

One reason the Brady-Manning rivalry has grown like no other is the number of times they have played, a testimony to the success of both since division winners are scheduled against one another in subsequent seasons.

“What is so unique about this rivalry is they have played each other so much,” said former Denver star John Elway, the oldest Super Bowl-winning quarterback from a triumph at the age of 38. “It’s amazing they have had this rivalry for such a long time and such a great one. It will be a great show.”

Elway only faced his top foe, Dan Marino, three times in their careers. Manning and Brady have met once a season except when Brady was hurt in 2008 and Manning injured in 2011.

Brady had the edge of playing his entire career under one coach, New England’s Bill Belichick, while Manning had three coaches during his days with the Indianapolis Colts and two more while at Denver.

And while Manning’s regular-season statistics stand out the most, it’s the playoffs where Brady shines brightest. Manning has five NFL Most Valuable Player awards to two for Brady, but Brady has three Super Bowl MVP awards to Manning’s one.