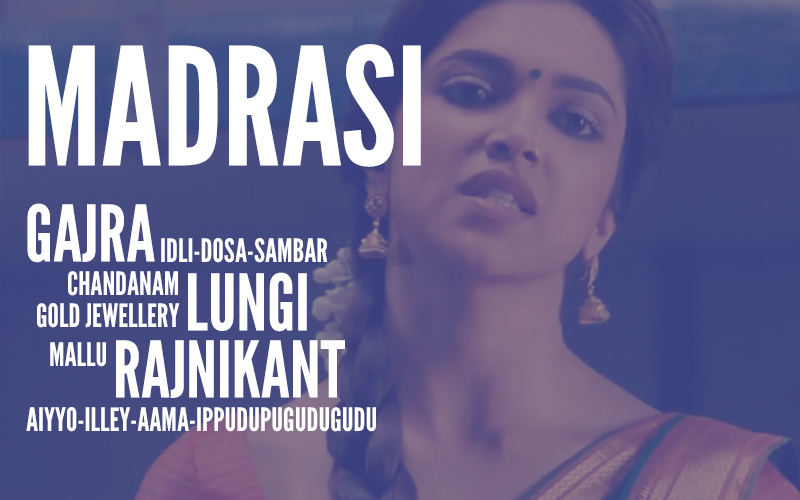 India — melting pot of a host of languages, a land where people from different regions, religions and walks of life exist in harmony. Oh wait, harmony? Sometimes, it isn’t exactly harmonious. South Indians say the Northies are ‘show offs’, while North Indians don’t spare their counterparts from Down South.

Where there is variety, there are also bound to be clashes of egos and attitudes. With these clashes, there come stereotypes. While some of these are amusing, most of them are downright irritating.

Oh yes, this one’s classic. So, apparently, South Indians are all supposed to be dark only. A fair South Indian is first inspected thoroughly, made to recite the story of their lives and then looked at with utmost surprise, the golden words “you’re a South Indian? But you’re so fair,” hurled at them.

This is again a very, very common and annoying practice. The moment some jerks meet a Bengali, all they do is flaunt their oh-so-obnoxious knowledge of broken Bengali with the oh-so-famous lines — “aami tumake bhalo bashi.” Oh, some move on to round 2 — mishti.

Seriously? Yes, I’ve had that coming way to often, so much that I would just give these idiots a cold, cold stare until they’d stop. Guys, South Indian languages don’t sound like that, duh!

This one’s got to be the worst. This borderlines stereotyping and racism. Yep. No, buddy, they’re not Chinese. They’re Indian only. More Indian than the ones who say that. Guess their brain’s Chinese which is why they don’t work. Call them ‘chinkis’ and land in jail. How’s that?

People who say this must have either snoozed through their geography classes or must have left their brains at home while going to school. South India has many different states and no, all of them aren’t Madrasis, for heaven’s sake!

From Bombay? You must be living in a 1BHK!

Oh ho, not all people in Bombay live in 1BHKs! Some live in smaller apartments, and some in much bigger ones. People who say this should just be banned from talking.

Delhi people only know how to abuse

Really? So, people from the rest of the country use only dictionary language? No, the BCs and MCs didn’t quite spring out from here and every part of the country ensures that these abuses are not given any step-motherly treatment. So, please.

No, they’re not! I have so many Marwari friends and they’re people who spend lavishly. Perhaps more than we can imagine. So, the next you want to refer to a Marwari as stingy, kindly switch on your brain to mouth filter.