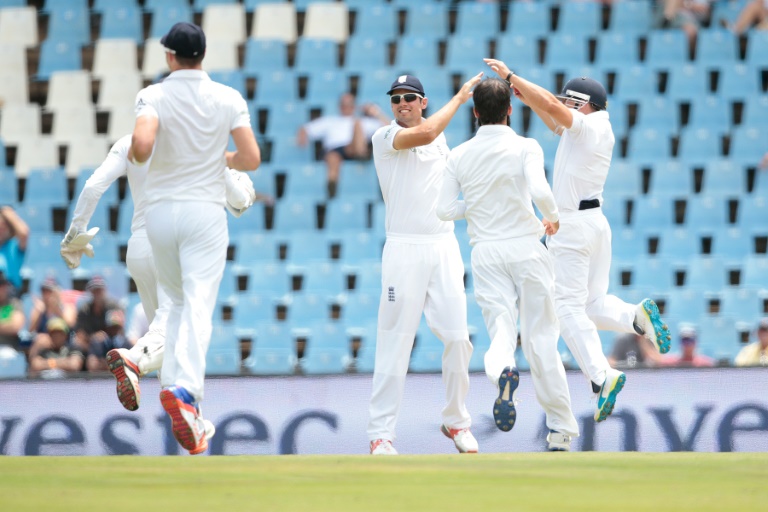 A freak catch by James Taylor at short leg was England’s only success on the first morning of the fourth and final Test against South Africa at SuperSport Park on Friday.

South Africa were 107 for one at lunch after winning the toss. Test debutant Stephen Cook was 46 not out and Hashim Amla was on 34.

Dean Elgar and Cook put on 35 for the first wicket before Elgar was caught by Taylor off Moeen Ali for 20 when the off-spinner was brought into the attack in the 11th over.

Elgar went for a pull shot and Taylor took avoiding action but the ball lodged between his legs and he was able to grab hold of it before it touched the ground.

Amla was dropped on five when he edged Ben Stokes low to first slip, where Alastair Cook, possibly obscured by diving wicketkeeper Jonny Bairstow, put down the chance.

In contrast to his father, Jimmy, who was dismissed first ball on his Test debut against India in 1992/93, Stephen Cook scored four off the first ball he faced, a leg side half volley from James Anderson.

Jimmy Cook did, however, make a century on debut against an English team in a ‘rebel’ international 11 seasons earlier.

Cook looked composed and well-organised in seeing off the new ball in overcast conditions. He had faced 91 balls and hit seven fours at the interval.

Cook was one of five changes from the South African side beaten by seven wickets in the third Test in Johannesburg last week.

Chris Woakes replaced the injured Steven Finn in the only change in the England team.

England hold a winning 2-0 lead in the series.