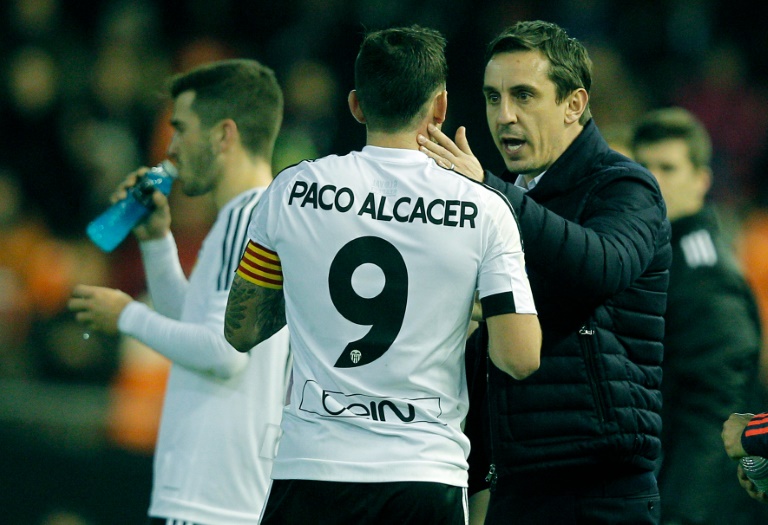 Gary Neville’s difficult start to life as Valencia coach continued as Los Che could only manage a 1-1 draw at home to Las Palmas in the first-leg of their Copa del Rey quarter-final on Thursday.

The Cup has been Neville’s safe haven so far, winning all three of his previous games in the competition whilst simultaneously failing to deliver a win in six attempts in La Liga.

However, Wilfried Zahibo’s own goal leaves Valencia with plenty of work to do in next week’s second-leg despite Paco Alcacer’s second-half equaliser.

Alcacer had a great chance to give the hosts the perfect start, but could only fire against the body of goalkeeper Raul Lizoain when played clean through on goal.

Las Palmas didn’t even have a shot on goal before half-time, but, such is Valencia’s luck at the moment, they still managed to go in front when French youngster Zahibo headed an aimless free-kick into his own net at the back post.

As so often this season, Alcacer came to Valencia’s rescue when they were in desperate need of a goal as he fired home his 11th goal of the season just after the hour mark.

And substitute Alvaro Negredo missed a great chance to hand Valencia the advantage in the tie when he failed to properly connect with Jose Luis Gaya’s low cross in stoppage time.

Holders Barcelona are well-placed to make the semi-finals once more after winning 2-1 at Athletic Bilbao in a repeat of last year’s final on Wednesday.

Meanwhile, Sevilla host Mirandes, the only remaining second-tier side in the competition, later on Thursday.