Home World France says EU must avoid British exit, not at any price 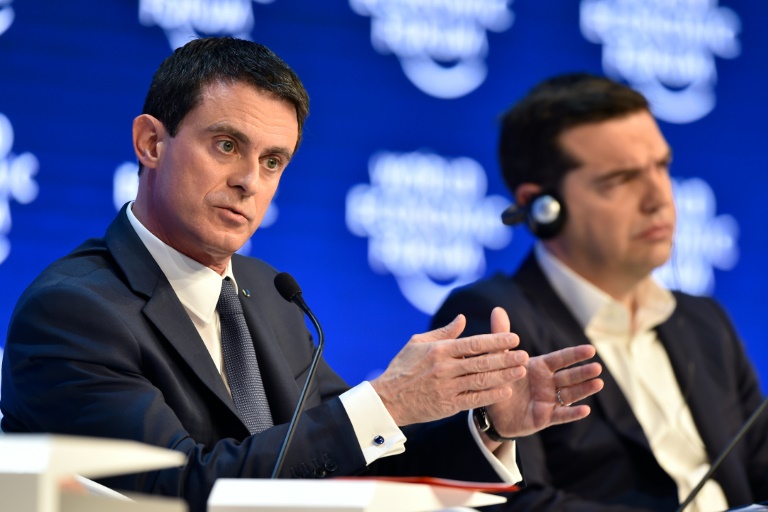 France said Thursday that a British exit from the European Union would be a tragedy, but warned that Britain’s demands for reform could not be met at any price.

British Prime Minister David Cameron has said he wants a deal on his EU reform demands by February so that he can campaign to stay in the bloc ahead of a referendum on membership, which he has promised to hold by the end of 2017.

A British EU exit would be “a very bad thing,” French Prime Minister Manuel Valls told reporters at an annual gathering of billionaires and political leaders in the snow-blanketed Swiss ski resort of Davos, where discussions have turned to the spectre of a so-called Brexit.

“There needs to be a deal, but not at any price,” the French prime minister said.

“Anything that allows us to simplify the organisation of Europe, yes. Anything that throws into doubt the foundations of the European project or the eurozone, no.”

Valls’ rather downbeat assessment contrasted with more positive noises from his German and Dutch counterparts in Davos on Thursday.

Cameron’s most hotly contested proposal is a four-year ban on top-up benefits for EU migrants working in Britain, which critics say is discriminatory and threatens freedom of movement in the EU.

The British leader, who is to speak at Davos later in the day, also wants the EU to give Britain safeguards against more political integration, to protect countries that do not use the euro currency and to boost economic competitiveness.

The French premier said the EU faced multiple pressures including from terrorism, refugee flows and the risk of a British exit, “which could lead to a fracturing of the European project, and not in a few years or decades, but in the next few months”.

Valls said the British leader is unlikely to win over fellow EU leaders by the time of their February 18-19 summit in Brussels, at which France will be represented by President Francois Hollande.

Negotiations on London’s demands only started a short time ago, Valls said, though he still hoped a solution could be found in February.

During a debate at Davos, Valls said it would be a “tragedy” if Britain were to leave the EU.

In Paris, Hollande said he would be “particularly vigilant” during talks with Britain to ensure the eurozone was not affected.

“The British government has made its demands… nothing is insurmountable so long as the founding principles of the union are preserved,” Hollande told a gathering of French ambassadors.

A European Union spokesman in Brussels said the “clear intention” was to strike a deal with London in the February meeting and no other summit had been scheduled.

Top European officials say a deal is still possible by then.

Dutch Prime Minister Mark Rutte, whose country holds the bloc’s rotating presidency, said in the same debate in Davos that he was “fairly optimistic” of a positive outcome at the February summit.

“I am convinced that during the council in February we will reach a fair deal with Britain and a fair deal for the 27 others,” European Commission head Jean-Claude Juncker told a news conference in Strasbourg the previous day.

Germany warned of the danger a Brexit would present to the EU.

“I hope that the British will stay in Europe and with us,” German Finance Minister Wolfgang Schaeuble said in Davos.

“It would be a disaster otherwise,” he said.