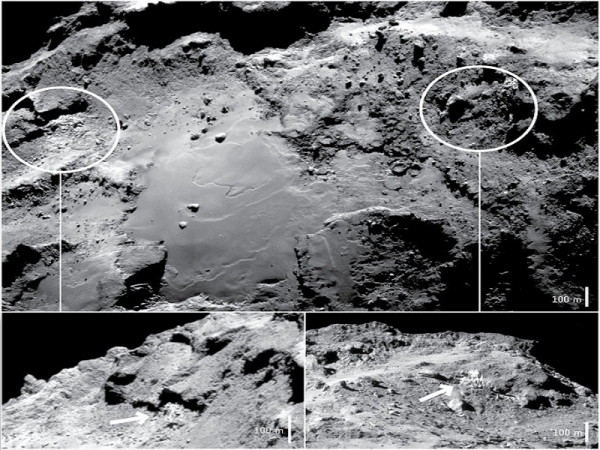 Researchers, including one of Indian-origin, have identified two large patches of water ice on the surface of comet 67P, perhaps the most studied comet in history.

The elusive ice was detected, using data collected by the European Space Agency’s Rosetta spacecraft, on the bottom part of the main lobe of the dumbbell-shaped comet, in a region called Imhotep.

It appeared as noticeably bright patches in visible light and was located on cliff walls and debris falls, researchers said.

“It looked like there was a breakage, or something fell down on the surface of the comet, and a large, new inside area that had water ice was exposed,” said Murthy Gudipati from the Jet Propulsion Laboratory in California and one of the paper’s authors.

The surface of 67P Churyumov-Gerasimenko, like most comets, is mainly covered by materials that are so dark they appear almost black.

This is because as comets fly towards the Sun, they are exposed to warm temperatures that cause surface ice to sublimate, or transform directly from solid to gas, ‘Los Angeles Times’ reported.

What remains are materials similar to rocks, sand and ash on Earth, researchers said.

Some of the grains were tiny, just tens of micrometres across which were probably formed as a result of the comet’s 12-hour rotation.

As this region of the comet turns away from the Sun, the temperature drops low enough for water ice to condense out of the coma and onto the nucleus, creating a thin layer of frost, researchers said.

During the ‘day’ on the comet surface, temperatures increase and the water evaporates back into the coma.

VIRTIS also detected evidence of this frost-like surface ice in the neck region of the comet.

The findings were published in the journal Nature.