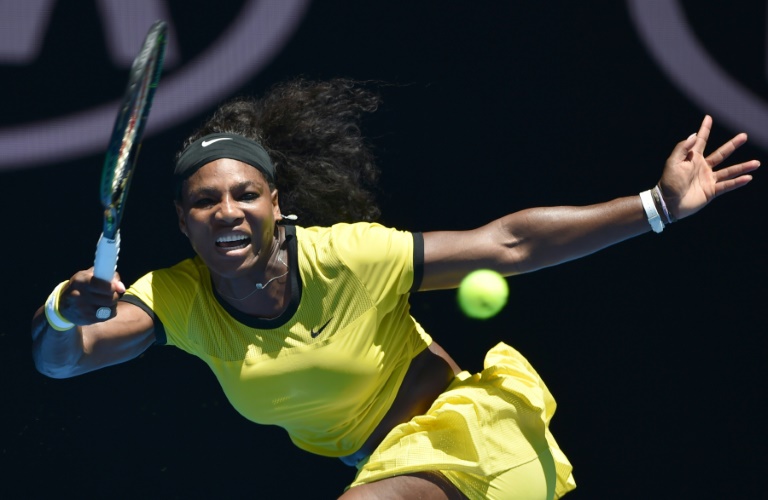 Dominant world number one Serena Williams added a rare around-the-net shot to her repertoire Wednesday as she steamrolled Taiwan’s Hsieh Su-wei on her way into the Australian Open third round.

She next faces Russian Daria Kasatkina with a potential quarter-final clash against arch-rival Maria Sharapova awaiting.

“She was definitely a tricky opponent but it was a good match for me to play someone like that. I needed that,” said Williams, who made her Grand Slam debut in Melbourne in 1998.

Williams said she was pleased by her consistency and lack of errors, but possibly the first around-the-net she has ever played was a highlight.

“You know, it’s always cool to do something fresh and new,” she said of the shot.

“I don’t know if I have done that. I could be wrong, but I definitely don’t remember ever hitting a shot like around the net. So it was good.”

While happy at the achievement, she drew the line at attempting a “tweener”, or crowd-pleasing between-the-legs shot which is one of Roger Federer’s favourites.

Williams gave herself an “A” for effort as she battled past Italy’s Camila Giorgi in the first round, easing concerns over an injured knee that troubled her in the build-up, but she didn’t need to try as hard against Hsieh.

On paper, the 90th-ranked Taiwanese was no match for Williams. She reached the tournament second week as a qualifier in 2008, but had only won two matches here since.

Williams though was taking nothing for granted in only her second tour-level match since the US Open in September.

Again wearing a canary yellow pleated skirt and matching midriff-baring shirt, she was slow to get going with her serve rusty but she held on to go 1-0 in front.

Williams soon got into the groove and was moving well, pressuring the Hsieh serve with searing returns and a wild volley from the Taiwanese handed her the initial break to pull 2-0 clear.

The 34-year-old American, who dropped only three matches in 56 last season, came under pressure in the third game but held firm to maintain the advantage before Hsieh finally got on the scoreboard for 1-3.

As Williams warmed to the task, Hsieh’s Grand Slam inexperience showed with the American breaking again to love then completing the set in 28 minutes.

Williams was consistently firing down serves 30 kph (18.6 mph) faster than Hsieh and it was taking its toll, with weak returns opening up the court for the top seed who made the most of her opportunities and sealed the match with an ace.

“I don’t think I made that many errors today,” said Williams. “And I moved much better, so slowly but surely feeling a little bit better.”

Williams won three majors — the Australian and French Opens and Wimbledon — last year which took her to within one of Graf’s long-time record of 22.

She claimed her first Australian Open in 2003, beating sister Venus in the final, and reached her sixth last year when she toppled Sharapova.