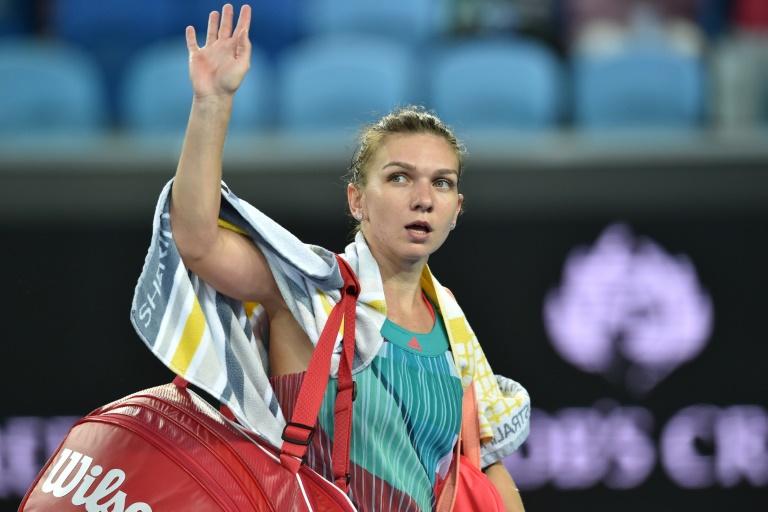 The Romanian, who has been struggling with a niggling achilles injury, had no answers to Zhang’s dominant baseline game with the Chinese number four scoring a stunning 6-4, 6-3 win on Margaret Court Arena.

The odds had been heavily stacked in Halep’s favour with Zhang playing 14 Grand Slam matches ahead of Tuesday and losing them all — the worst record of any top 300 player.

But she was a different player on Margaret Court Arena, punishing the Romanian’s scrappy service game while dominating at the net and from the baseline.

“I’m so excited that I played so well,” said Zhang, who burst into tears during her courtside interview as the enormity of the upset sunk in and the crowd gave her a generous ovation.

“I’m so happy, so excited at beating the world’s number two player.”

The 27-year-old, ranked 133 in the world, said it was the “most memorable moment of my tennis life”.

Few would given her any hope as the two walked out on court, but Halep didn’t know what hit her as Zhang raced to a 4-0 lead.

The second seed finally got a break in the fifth game and looked to be clawing herself back into the match at 2-4, but she lost focus as sweat poured off her and Zhang pounced again to take the set.

Halep appeared to regain her composure as the second set unfolded, taking a 3-1 lead before Zhang again stepped up her game, reeling off a forehand winner to secure the biggest scalp of her career.

It was a huge setback for Halep, who is enjoying her highest ever ranking after a stellar 2015 in which she won titles at Shenzhen, Dubai and Indian Wells, raking in more than US$4.5 million in prize money.

She made clear ahead of the tournament that the ultimate goal was Grand Slam glory, with that dream now on hold.