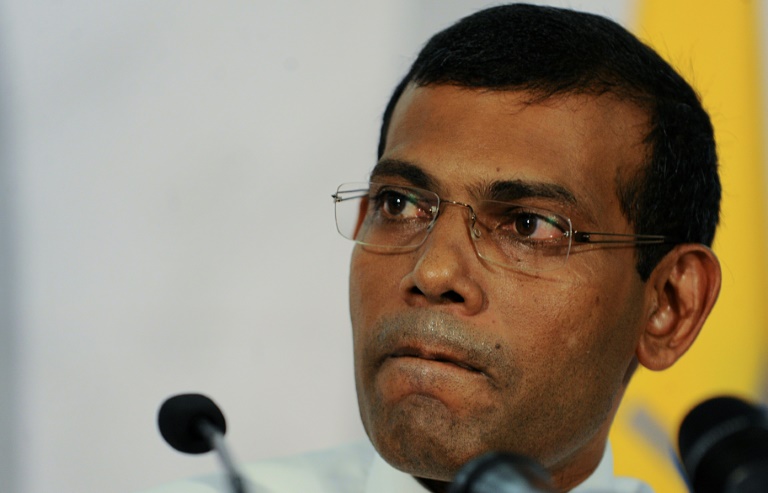 Jailed former Maldives president Mohamed Nasheed on Tuesday thanked the world leaders who helped secure his release for urgent surgery in Britain, after being granted temporary leave from his prison cell.

Nasheed, whose conviction last March on terror-related charges has been widely criticised, left the Maldives late Monday for Sri Lanka, after a delay caused by a legal dispute with the honeymoon island nation’s hardline government.

The opposition leader spent his first day of freedom since his imprisonment in a top hotel in the capital Colombo and is due to fly to Britain on Wednesday.

“He is making calls to world leaders to thank them for their support in getting him released,” his aide, Ahmed Naseem, told AFP.

Aides said Nasheed had decided against speaking to reporters in Colombo on Tuesday, given the intense diplomacy involved in brokering the deal, and would only meet his doctors in Colombo before flying directly to London.

He had been due to leave the Maldives on Sunday after the government said he could travel for urgent spinal cord surgery under the deal brokered by diplomats from India, Sri Lanka and Britain.

But he refused a government request to leave a relative behind to act as a guarantor liable to prosecution if he failed to return to serve the rest of his 13-year sentence, leading to a tense back and forth over conditions.

The United States, which has pressed for Nasheed’s complete freedom, welcomed his temporary release and urged hardline President Abdulla Yameen to take more steps towards democracy.

US Secretary of State John Kerry spoke by phone to Nasheed on Monday night, his US lawyer said in a tweet, after his release from the high-security Maafushi prison located on a small islet near the capital Male.

“Release of Nasheed is step in the right direction, urge more engagement from Government of Maldives on democracy, shared challenges,” Kerry said on Twitter early Tuesday.

Nasheed, 48, became the first democratically elected president of the Maldives in 2008 and served for four years before he was toppled in what he called a coup backed by the military and police.

He was sentenced to 13 years in jail on terrorism charges relating to the arrest of an allegedly corrupt judge in 2012, when he was still in power.

The United Nations has said his trial was seriously flawed and he should be released and compensated for wrongful detention.

But Yameen has refused to accept the UN ruling and has been resisting international pressure to release Nasheed.

The government initially said Nasheed could have the procedure on the tiny archipelago, but then agreed to allow him to travel to Britain.

Nasheed’s opposition Maldivian Democratic Party agreed Monday to the government’s amended demand for his brother to instead update authorities on Nasheed’s whereabouts while abroad.

The Maldivian government in a statement insisted that all legal formalities had been followed before Nasheed was allowed to leave.

President Yameen is a half-brother of former strongman Maumoon Abdul Gayoom, who ruled for 30 years until his defeat by Nasheed in the country’s first multi-party elections in 2008.