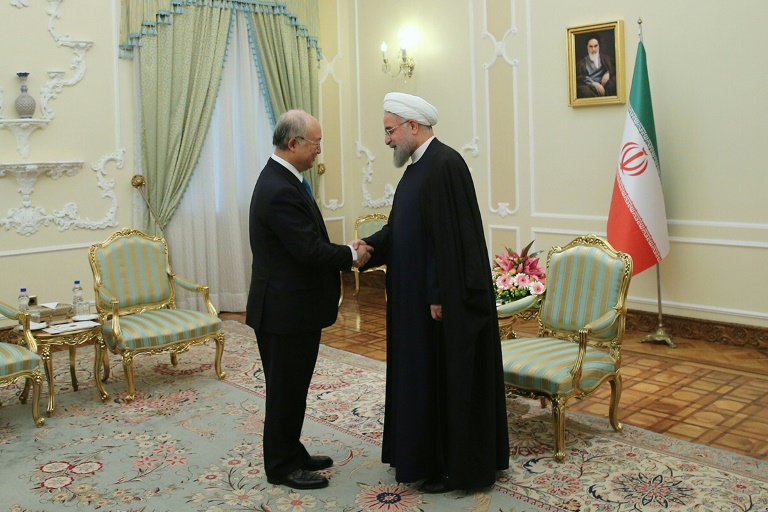 Iran announced a major boost in oil production on Monday after the lifting of sanctions under its nuclear deal, while condemning new US measures against its missile programme.

The National Iranian Oil Company said it had ordered production to increase by 500,000 barrels per day — a move Tehran had long planned for once its nuclear deal with world powers took effect.

The hike comes after the UN atomic watchdog confirmed at the weekend that Iran had complied with measures imposed by the deal with global powers reached in Vienna in July.

World leaders hailed the implementation of the deal, and the subsequent lifting of European and US sanctions, as a milestone in international diplomacy.

Tensions have persisted, however, with the US Treasury on Sunday announcing new sanctions on individuals and companies in connection with Iran’s ballistic missile programme.

In welcoming the implementation of the nuclear deal, President Barack Obama had raised concerns about Iran’s continued “destabilising activities” including its ballistic missile programme.

Tehran decried the new measures as “illegitimate”, with foreign ministry spokesman Hossein Jaber Ansari insisting the missile programme has no links with the nuclear issue.

He said Iran would respond by “accelerating its legal ballistic missile programme and boosting defence capabilities”.

But Iran was moving forward after the implementation of the nuclear deal as expected, with the increase in oil production expected to be followed by another half-a-million-barrel rise in six months.

National oil company chief Rokneddin Javadi, also Iran’s deputy oil minister, said Iran was moving forward with the increase despite a global supply glut that has pushed oil prices to 12-year lows, with a drop to below $28 a barrel on Monday.

“If Iran doesn’t increase its oil production, neighbouring countries may in the next six to 12 months increase their production and take up Iran’s share,” Javadi said.

Cooperation on the nuclear programme was also pushing ahead, with International Atomic Energy Agency chief Yukiya Amano in Tehran for talks on Iran’s continued compliance with the deal.

Amano said the agency was entering a new phase of cooperation with Iran, with implementing the so-called additional protocol, which allows for tougher inspections and monitoring, “of particular importance”.

“We must maintain the momentum,” he said, insisting very strong verification procedures were in place.

Speaking at an energy summit in Abu Dhabi, French Foreign Minister Laurent Fabius vowed world powers would be “extremely strict in monitoring the implementation” of the agreement.

Rouhani on Sunday said the taking effect of the nuclear deal — negotiated with the United States, Britain, China, France, Russia and Germany — had “opened a new chapter” in Iran’s relations with the world.

Rezaian, Christian pastor Saeed Abedini and former US Marine Amir Hekmati arrived at a US military base in Germany late on Sunday on their way home from Iran.

Under the exchange, Washington said it had granted clemency to seven Iranians, six of whom were dual US-Iranian citizens, and dropped charges against 14 others.

Rouhani, a moderate whose 2013 election victory helped launch the huge diplomatic effort toward the deal, has promised that the lifting of sanctions will give a major boost to Iran’s economy.

German automaker Daimler said Monday that its heavy goods vehicles unit, Daimler Trucks, planned a swift return to the Iranian market and had signed letters of intent with local partners.

The nuclear deal drew a line under a standoff dating back to 2002 marked by failed diplomatic initiatives, ever-tighter sanctions, defiant nuclear expansion by Iran and threats of military action.

The steps taken so far by Tehran extend to at least a year — from a few months previously — how long Iran would need to make one nuclear bomb’s worth of fissile material.

They include slashing by two-thirds its uranium centrifuges, reducing its stockpile of uranium and removing the core of its Arak reactor, which could have given Iran weapons-grade plutonium.