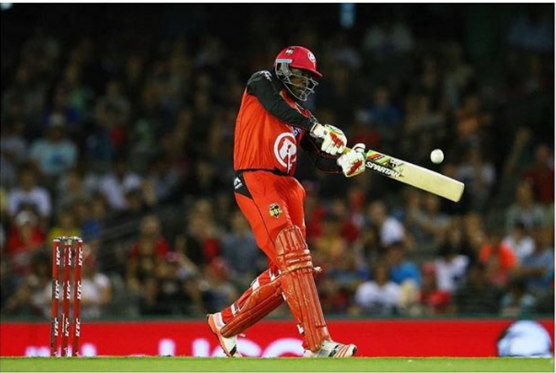 Displaying his immense prowess as a T20 specialist yet again, Gayle hit as many as seven sixes and two fours during his blistering knock.

He was finally dismissed for 56, which came off just 17 deliveries, with a phenomenal strike-rate of 329.41.

The 36-year-old opening batsman’s knock also smashed the Big Bash record for the fastest fifty from 18 balls, which was jointly held by Tim Ludeman and Chris Lynn.

Indian middle-order batsman Yuvraj had set the record in 2007 during the T20 World Cup against England in Durban. His innings included six sixes in an over off pacer Stuart Broad.

Gayle also holds the record for the fastest Twenty20 hundred and fastest double century in the ODIs.

The Jamaican batsman had taken just 30 balls to reach his T20 century during an Indian Premier League match in 2013 while playing for Royal Challengers Bangalore.

His double ton came off 138 balls against Zimbabwe in the 2015 World Cup.

Despite Gayle’s record feat, Renegades were beaten by 27 runs.

Chasing 171, they were bundled out for 143 in 15.3 overs by the Adelaide Strikers. Renegades were supposed to chase down the target in less than 16 overs to improve their net run rate and qualify for the semi-finals of Big Bash. But they failed to do so and were crashed out of the league.