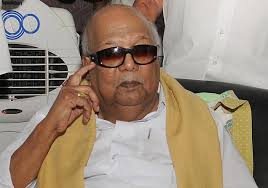 Security was beefed up around the court as the 91-year-old DMK leader had confirmed in a statement about his appearance at the court.

Principal Sessions Judge M. Athinathan had last month asked Karunanidhi and editor Selvam of DMK’s mouthpiece ‘Murasoli’ to appear before the court on January 18, while hearing criminal defamation cases filed against them by the State government.

The City Public Prosecutor had alleged that Karunanidhi wrote an article in ‘Murasoli’ about the AIADMK government’s performance in the last four years, which per se was defamatory.

Ms Jayalalithaa, 67, sued Mr Karunanidhi late last year after his party’s magazine ran an article, which she alleges defames her.