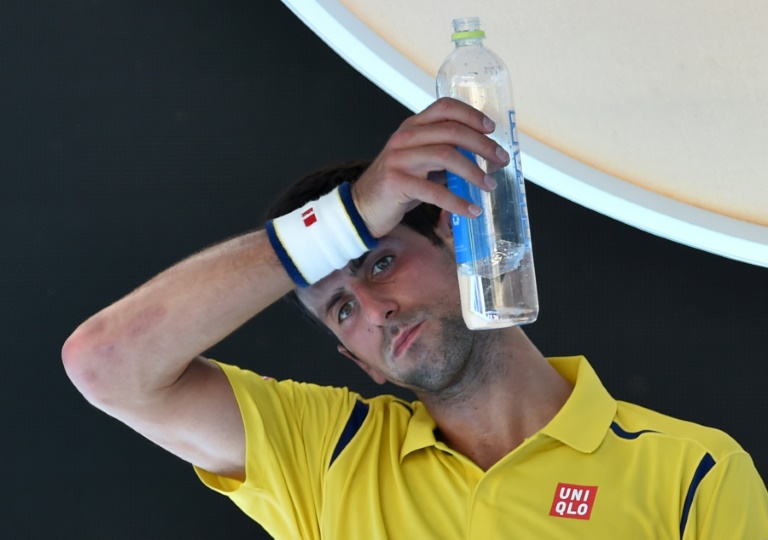 Defending champions Novak Djokovic and Serena Williams raced into the Australian Open second round Monday as the year’s first Grand Slam was rocked by claims of widespread match-fixing in tennis.

Former winners Roger Federer and Maria Sharapova also progressed smoothly on a day of high temperatures at Melbourne Park, where one ballboy felt faint and had to be helped from the court.

“You try to stay composed, not get carried away by heat, get distracted,” said the Serb, who was forced out of the 2009 quarter-finals as he struggled with the heat.

“Of course, there were some long rallies, long exchanges that got both of us a little bit short on air. But I think physically I was really good on the court.”

Williams also made a positive return to competitive tennis, four months after a heartbreaking defeat in the US Open semi-finals ended her bid for a rare calendar-year Grand Slam.

Showing no discomfort from the swollen knee which forced her out of this month’s Hopman Cup mixed-team tournament, Williams toughed it out 6-4, 7-5 against Italy’s Camila Giorgi.

“I haven’t played a competitive match in a really long time so it was good for me to come out here and get through it,” Williams said. “I was able to stay in it and stay calm and that is what matters most.”

Federer was also untroubled in his 6-2, 6-1, 6-2 win over Georgia’s Nicoloz Basilashvili as he continued his quest for a record-extending 18th Grand Slam title.

Sharapova, the women’s winner in 2008, beat Japan’s Nao Hibino 6-1, 6-3 in just 73 minutes in her first match of the year after a forearm injury forced her out of the Brisbane International.

“I’m feeling really good, which is a positive. I’m just happy to finish off today and be able to get ready for the next one,” said the Russian.

Spain’s Carla Suarez earned applause when she helped a ballboy from the court as he swooned in high temperatures during her win over Viktorija Golubic.

However, the day was overshadowed by a report which said top-50 players, including Grand Slam champions, had repeatedly been suspected of match-fixing without facing action.

Three suspect matches were at Wimbledon, and eight of the players under suspicion were due to take to the courts for the Australian Open, the BBC and BuzzFeed claimed.

Association of Tennis Professionals (ATP) chief Chris Kermode rejected any suggestion that match-fixing evidence had been covered up or ignored.

“The Tennis Integrity Unit and the tennis authorities absolutely reject any suggestion that evidence of match-fixing has been suppressed for any reason or isn’t being thoroughly investigated,” Kermode told reporters.