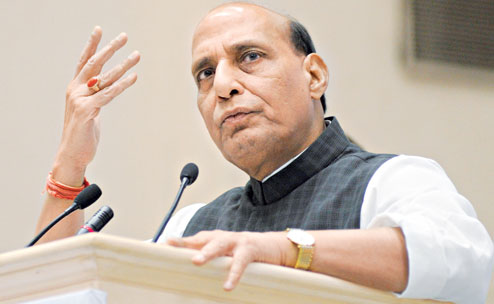 Greater Noida: After preliminary report by Pakistan on Pathankot attack probe, Union Home Minister Rajnath Singh on Monday said, India has no reason to distrust Pakistan’s assurance that it will take effective action on inputs given about the perpetrators of the Pathankot terror attack.

“Pakistan government has said it will take effective action. I think we should wait,” Singh said.

Singh said since Pakistan has given the assurance to the Indian government, there should be no reason to disbelieve them so early.

“There is no reason to distrust them (Pakistan) so early,” he said.

After the attack, India had said it has provided to Pakistan actionable intelligence to act upon the perpetrators of the terrorist act.

During a post-attack telephonic conversation between Prime Minister Narendra Modi and his Pakistani counterpart Nawaz Sharif, the government had said that “our Prime Minister very strongly urged the Prime Minister of Pakistan to take action.

Reports from Pakistan yesterday said law enforcement agencies have picked up “some suspects” connected to Pathankot airbase attack from Bahwalapur district, the hometown of Maulana Masood Azhar, chief of banned terror outfit Jaish-e-Mohammed. India has identified Masood Azhar as mastermind of the attack.

It also blamed his brother Rauf and five others for carrying out the attack that left all six terrorists and seven Indian soldiers dead on January 2.

It has provided telephone number in Pakistan contacted by the airbase attackers and given other inputs. India has called on Islamabad to act on the information if the Foreign Secretary-level talks are to take place as scheduled on 15 January.