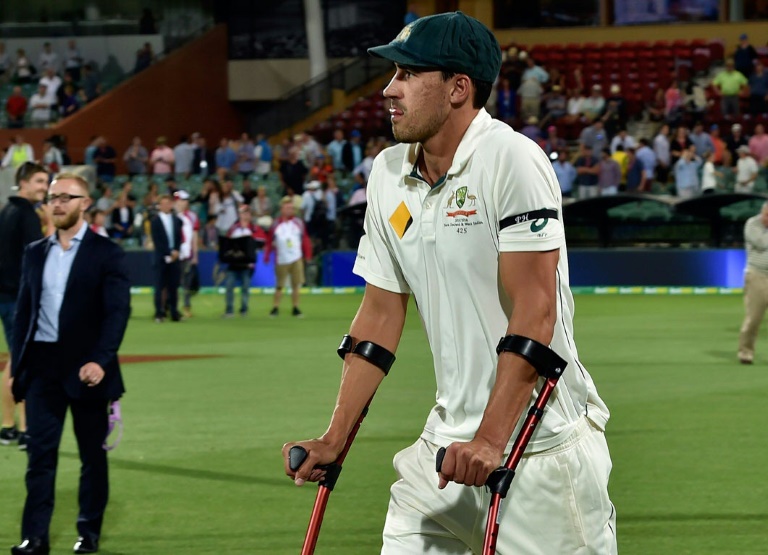 Australia’s pace spearhead Mitchell Starc Wednesday virtually ruled out recovery from injury in time for the Twenty20 World Cup but said he could be back for the mid-year tri-series in the West Indies.

The star fast bowler recently had right ankle and foot surgery after breaking down during the day-night Test against New Zealand in Adelaide last November.

Starc, 25, who spoke to reporters at the rain-hit Sydney Test against the West Indies with his right foot protected by a moon-boot, said he was uncertain about when he would return.

However, he all but ruled out playing in the T20 World Cup, starting in India on March 8.

“It’s very unlikely. Everything would have to go perfectly to be any chance. I won’t know until I can start doing some stuff on it,” Starc said.

“I’ve played probably non-stop for two years and the silver lining is I get to give the body a bit of a break and rebuild that strength.

“Make sure everything is 100 percent before I go again.”

Starc said he had more chance of playing in the T20 Indian Premier League in early April or in the one-day tri-series against South Africa and the West Indies in the Caribbean in June.

“I donâ€™t know at this stage. It comes back to when I start bowling and how it reacts to the bowling. Thereâ€™s no real timeframe,” he said.

“That (the IPL) could be a possibility and there’s the West Indies tri-series after that as well. There’s cricket all throughout the year and I don’t want to rush it.

“I want to make sure it’s 100 percent before I go and play my first game.”

Starc, who took over leadership of Australia’s pace attack following the retirement of Mitchell Johnson last November, said he was happy with the surgery.

“By all reports the surgery has gone really well and it’s more just waiting for the fracture to heal more,” he said.

“The ankle’s going really well. The movement in it is really good at the moment.

“I had the three spurs shaved back and a whole heap of scar tissue out of the front and a big piece of bone pulled out of the back of the ankle.

“If the foot wasn’t broken I’d be doing a lot more than I am at the moment.”

Starc said he expected to be running within five to six weeks.