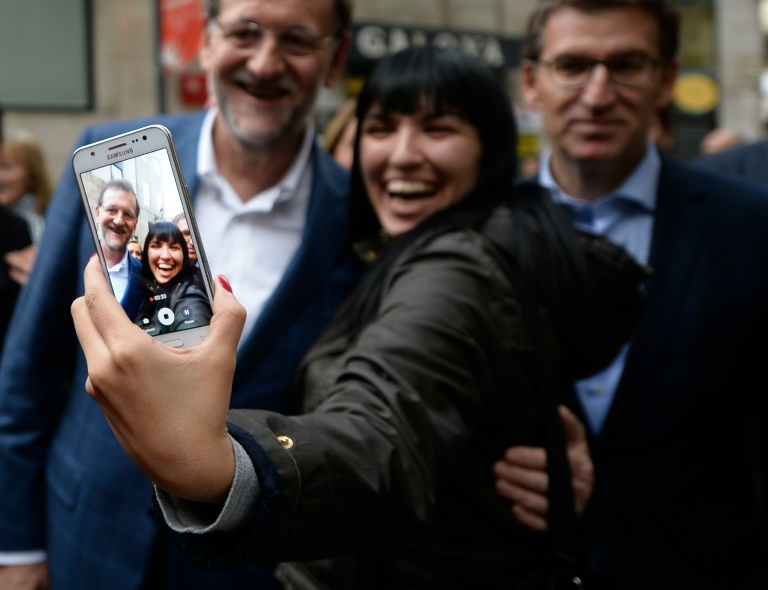 Marked by an acrimonious debate, a punch in the face, star turns on TV and four very different main candidates, Spain’s election campaign comes to an official close Friday ahead of this weekend’s general election.

For two weeks, incumbent Prime Minister Mariano Rajoy and his rivals have criss-crossed the country on a mission to seduce voters whose disillusionment over corruption and austerity measures has fuelled the rise of dynamic, new parties that could make a splash in Sunday polls.

“There’s a lot more enthusiasm for politics than four years ago, and everything indicates that… there will be high levels of participation,” the centre-right El Mundo daily wrote in an opinion piece ahead of Sunday’s vote.

Opinion polls predict that Rajoy’s ruling, conservative Popular Party (PP) will win the largest share of the vote but without an absolute majority, which will force it to get into bed with another political grouping to wield any kind of power.

But whether it will manage to do so — and with whom — remains a mystery as the traditional, main opposition Socialists are expected to come neck-and-neck with two upstart parties, the centrist Ciudadanos and anti-austerity Podemos.

And that is the main change in this campaign — from a long-standing bi-party political scene, Spanish voters now have four very different groupings to choose from as well as the usual spattering of smaller-scale candidates.

Sky-high unemployment, rising inequalities, corruption scandals and an independence movement in Catalonia are just some of the issues broached during the campaign.

Rajoy, 60, has positioned himself as a safe pair of hands who dragged the country away from economic collapse and put it on the path of recovery.

Socialist party (PSOE) chief Pedro Sanchez, 43, has promised to reinstate the rights of workers and immigrants whom he says the PP trampled on with its spending cuts, tax rises and health policies.

Pablo Iglesias of Podemos, 37, promises to defend “the lower classes” while Ciudadanos leader Albert Rivera, 36, has put forward a single employment contract system to get rid of precarity in the workplace.

All four men are set to close their campaigns in Madrid and the eastern city of Valencia later Friday before an obligatory “day of reflexion” ahead of Sunday’s vote.

But candidates in this year’s campaign may be remembered more for their star turns on television and in glossy magazines than for their policy proposals.

Iglesias strummed a guitar on TV, Rivera posed in Glamour magazine and even Rajoy discarded his long-held suspicion of the media when he appeared on a chat show to discuss his personal life.

The campaign has also taken on an aggressive edge, particularly in its last week.

A debate between Rajoy and Sanchez on Monday went sour when the prime minister’s rival accused him of not being a decent person, demanding to know why he had not resigned over repeated corruption scandals that have hit the PP since he took office in 2011.

Then on Wednesday, as the premier mingled with crowds in Pontevedra city in his northwestern fiefdom of Galicia, a teenager suddenly punched him in the face, knocking off and breaking his glasses.

Rajoy was not badly hurt and the 17-year-old was quickly detained, but the incident made headlines into Friday.

“I was going to ask the Three Kings for new glasses, but I’m told they have been found,” the premier tweeted Friday above a picture of Earth seen from space, with a pair of glasses floating nearby.