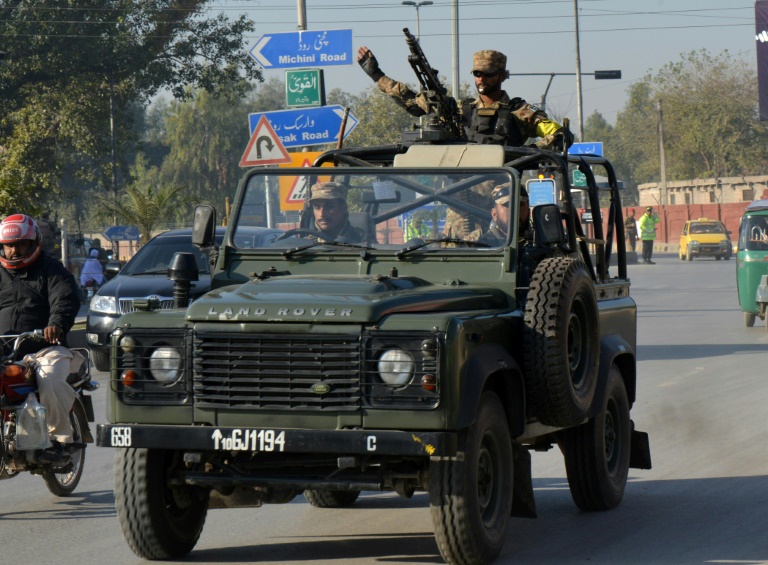 Pakistan students on Wednesday marked the first anniversary of a Taliban school massacre that left 151 people dead, bearing images of their classmates and teachers slain in the incident which shocked a country already scarred by nearly a decade of attacks.

The assault by nine gunmen on an army-run school in the northwestern city of Peshawar, which mostly claimed the lives of schoolchildren, was Pakistan’s deadliest ever extremist assault.

Parents of the 134 children killed were greeted by powerful military chief Raheel Sharif at the start of the ceremony at the Army Public School, with Prime Minister Nawaz Sharif and opposition leader Imran Khan also in attendance.

Earlier, the parents had visited their children’s graves in Peshawar.

Pakistan deployed paramilitary forces and police in major cities for the anniversary.

In Peshawar, roads were closed and hundreds of soldiers stood at alert on main junctions early Wednesday ahead of the ceremony.

The area surrounding the school was designated a red zone, with even dignitaries and journalists invited to attend the event having to park at least a mile away and be transported in by the military. An army helicopter hovered overhead.

Khan called on the nation to stand firm against extremism in honour of the victims of the “unimaginable tragedy”.

“A yr later we must honour the memory of APS martyrs & courage of the survivors by strengthening our resolve to defeat terrorists’ agenda,” he said on Twitter.

Elsewhere on social media, Pakistanis were changing their profile pictures to an image depicting an Army Public School uniform with a bloody bullet hole resembling a poppy, and a caption reading: “Some stains don’t wash out”.

News anchors on Geo TV, the country’s largest private broadcaster, were also clad in APS uniforms Wednesday, with the move enraging many social media users who termed it “insensitive”.

Army Public Schools across the country were open for ceremonies marking the anniversary, despite a security official telling AFP Tuesday that they were “particularly under threat”. District schools in the provinces of Punjab and Sindh were closed.

The attack hardened public opinion against extremism and prompted a military-led crackdown that has improved security, with 2015 on course for the fewest deaths linked to extremist violence since 2007, the year the Pakistani Taliban was formed.

But critics warn that long-term steps are not being taken to eradicate the scourge of extremism in society.

One year on, a veneer of normality has returned to the Peshawar school where classes have resumed and children play while soldiers stand atop recently fortified walls.

But the trauma lingers for many.

“We think a lot about the students who lost their lives,” Abu Bakar, a teacher who was shot three times as he threw himself in front of fleeing children during the siege, told AFP, saying the loss was “something that cannot be described”.

Parents of the slain children say they are still seeking answers about how the nation’s security apparatus could have failed them so completely.

In August, after a military trial that took place behind closed doors, the army announced that six militants linked to the Peshawar assault would be executed, while a seventh was given a life sentence.

On December 2, four were hanged at dawn in a prison in the northwestern city of Kohat, enraging parents who wanted to witness their deaths.

Some parents are also demanding a full judicial inquiry, complaining that no government, security or military official has yet been held to public account.

But at the school, teachers and students told AFP that education was their best revenge.

“The Taliban want us to quit our studies and become ignorant like them,” 13-year-old Uzair Khan told AFP.

“We don’t want to do that. God willing, we will continue our education, move forward and avenge them.”