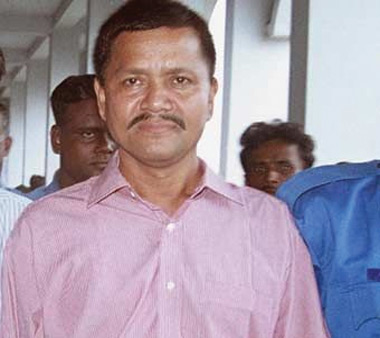 Guwahati: Deported ULFA leader Anup Chetia, who is an accused in a number of murder, abduction and extortion cases, on Monday sought forgiveness from the people of Assam for “past mistakes” and said he was ready for peace talks.

“I ask for forgiveness from the people of Assam for our past mistakes”, the ULFA General Secretary, who was incarcerated in Bangladesh for 18 years, said.

Coming out of the designated court here after being produced in connection with two TADA cases, the ULFA leader said, “I pay tribute to the people who lost their lives for opposing our revolution and pray for peace of their souls”.

“I am grateful to Prime Minister Narendra Modi, union Home Minister, Foreign Minister, union Sports Minister Sarbananda Sonowal and Assam Chief Minister Tarun Gogoi for trying to bring me back,” Chetia, who returned from Bangladesh where he was incarcerated in jail for 15 years, said.

The ULFA leader was then whisked away by security personnel before he could answer further queries.