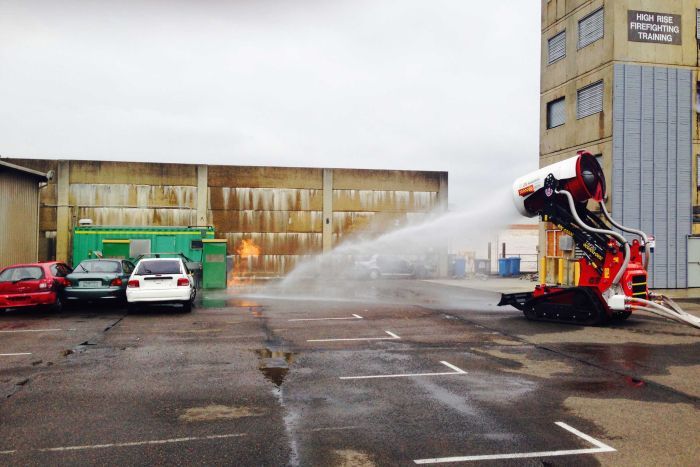 Melbourne: In a bid to fight fire without threatening human life, first remote controlled fire-fighting robot was unveiled in Australia that can sweep away obstacles and clear smoke from burning buildings.

The Turbine Aided Firefighting machine (TAF 20) is seen as the latest weapon to fight fires in New South Wales (NSW).

The TAF 20 has bulldozer blades capable of moving cars out of the way and a high-powered fan to blow away smoke. It can also spray water mist or foam from 60 metres and blast water for 90 metres, ABC reported.

The robot will be based at Alexandria in Sydney and can be quickly deployed by road or air to where it is needed, Fire and Rescue NSW Commissioner Greg Mullins said.

“It can be remotely operated up to 500 metres away and sent into situations where it is too dangerous for firefighters, which is a huge advantage,” he said.

“It also has a bulldozer blade which can clear obstacles like cars during a tunnel incident, or debris following an explosion,” Mullins said.

The robot costs 310,000 dollars and was made and imported from Germany.

The TAF 20 was put to the test last week at a Botany factory fire in Sydney, where NSW Emergency Services Minister David Elliot said it proved its effectiveness.

“It will be of great use for our firefighters in battling other large and complex fires, including bush-fires,” Elliot added.