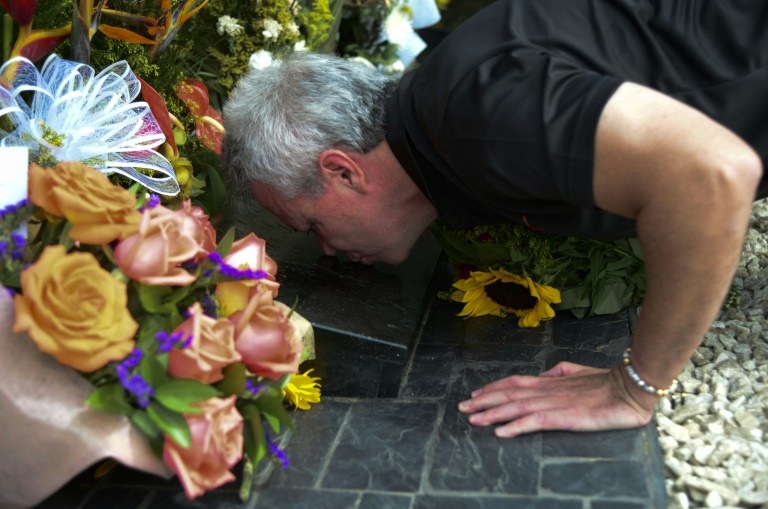 Popeye the hitman kneels down in the gravel, bends over and kisses the black slate tomb of his late boss and friend, Colombian drug lord Pablo Escobar.

He parted ways with Escobar’s blood-stained Medellin Cartel in 1992, and, after serving a 23-year prison sentence, says he is trying hard to be a new man.

But this self-confessed killer of hundreds of people still harbors fond memories of the man who took him aside three decades ago and invited him into a world of glitz, intrigue, violence and wealth he could only have dreamed of.

“Pablo Escobar Gaviria was a murderer, a terrorist, a drug trafficker, a kidnapper and an extortionist. But he was my friend,” said Popeye, whose real name is Jhon Jairo Velasquez.

“He had an incredible magnetism,” he told AFP in an interview in Medellin, the city from which Escobar ran a massive cocaine trafficking operation that made him the world’s seventh-richest man.

Popeye was Escobar’s chief “sicario,” or hitman, during the bloodiest period of the Medellin Cartel’s reign in the 1980s.

He met the feared kingpin while working as a bodyguard for a Colombian beauty queen. Escobar invited her to his house one night, and Popeye went along.

Simple as that, this cattle farmer’s son from the small village of Yarumal was employed by the Medellin Cartel.

Popeye, who is 53 today, is unabashed by his crimes.

“At that level, you don’t count anymore. I didn’t make a little hash mark every time I killed somebody,” he said, seated on a bench in front of Escobar’s austere tomb in the Itagui cemetery perched above Medellin.

“It was a brutal war. The Medellin Cartel against the Cali Cartel, against the government, against the Americans… But the problem with war is that there are innocents, there are pregnant women who fall,” he said with a sigh.

Popeye quit Escobar’s outfit one morning in July 1992, knowing he would be arrested. He was 30 years old.

“I was in love. I wanted to live. I gave him my pistol. We hugged and I left him, alone,” he said.

Escobar was killed in a rooftop shootout with police in Medellin the following year.

Popeye for his part was sentenced to 30 years in a maximum security prison. He was released last year on parole, nearly seven years early.

He went into therapy while he was in prison.

“I’m a professional killer, not a psychopath who kills people because he can’t help it,” he said.

For eight years, he and his psychologist “worked on my violence,” he said.

“Every day, I made a list of all the nasty things I said to the guards. Little by little, I changed my way of thinking and acting.”

Popeye got his nickname from an early stint as a sailor and his sharply protruding chin — which he has since had plastic surgery to reduce.

Today, his close-cropped hair going white, he says little remains of his younger self. But he retains his esteem for “the boss.”

He is not alone.

Every year in Medellin, Escobar’s admirers celebrate the anniversary of his birth and death — December 1, 1949 and December 2, 1993.

People come from across the country and even overseas to visit his grave.

“Pablo Escobar was a god,” said 28-year-old Jorge Londono. “Even if he did a lot of harm to Colombia. He was a complex character, capable of loving and hating with the same strength.”

Irene Gaviria, 88, thanks the fallen drug lord for giving her a decent roof over her head — one of the thousands of colorful houses he built for the destitute people who lived at the Moravia garbage dump.

“He did a lot of good things for us,” said Gaviria.

The reverence for Escobar extends to Popeye, who gamely signed autographs on 2,000-peso bills (worth about 60 US cents) for visitors to the drug lord’s grave.

But Popeye is glad to distance himself from the past.

“I’d never been free before. I was with Pablo Escobar and then I was in prison,” he said.