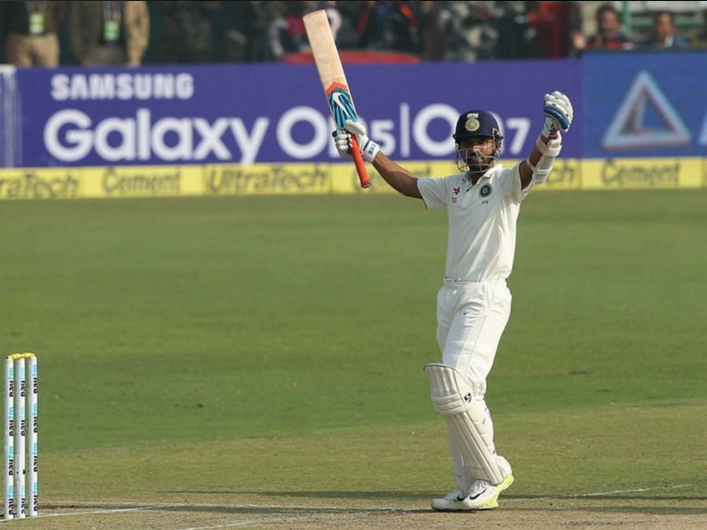 New Delhi: Ajinkya Rahane struck his fifth Test hundred to guide India to a commendable 326/8 at lunch on the second day of the fourth and final cricket match against South Africa on Friday.

Rahane scored 127 off 215 balls, achieving the distinction of being the first player from either side to have reached a three-figure mark in this low-scoring series so far.

The stylish right-hander’s knock was studded with 11 fours and five sixes. He added 98 runs off 193 balls for the eighth wicket with Ravichandran Ashwin (53 batting), who completed his sixth half-century in the longest format.

Incidentally, this was also the highest stand for any wicket among either teams in the series. Rahane-Ashwin duo surpassed the previous best of 86 between Murali Vijay and Cheteshwar Pujara.

Among the many firsts, it was Rahane’s maiden hundred on home soil as he has not enjoyed a lot of success in the few Test matches that he has played in India. This was also the first time that one team passed a total of 300 runs with the previous highest being 215 in Nagpur.

This was also the first time that only one wicket fell in a single session which yielded 95 runs.

What made the knock even more special is the fact that this is the ground where he made an inauspicious Test debut failing (7 & 1) in both the innings.

Rahane’s moment of glory came with a glorious straight drive off Kyle Abbott as the entire Indian dressing room stood up to applaud him. The 100 came off 180 balls which included 10 well-timed boundaries and two sixes.

The count of maximums doubled once he reached his ton. He hit off-spinner Dean Elgar for successive sixes. The first was an angled delivery which Rahane danced down the track to hit wide of long on. The next also met with identical fate but it was over long-off.

The only blemish that happened was on 101 when Rahane tried playing a forward defensive stroke and the edge was dropped by wicketkeeper Dane Vilas much to the frustration of the left-arm spinner Dean Elgar.

Rahane’s dismissal was a soft one when Imran Tahir bowled a fullish delivery which the batsman hit straight at AB de Villiers who was standing at covers.

It obviously helped that he found an able ally in Ashwin, who was prepared to stay at the wicket and grind it out. At the same time, Ashwin did not mind punishing the loose deliveries that came his way.

Ashwin struck some elegant boundaries — six in all — apart from the six he hit off Tahir that brought up his half-century.