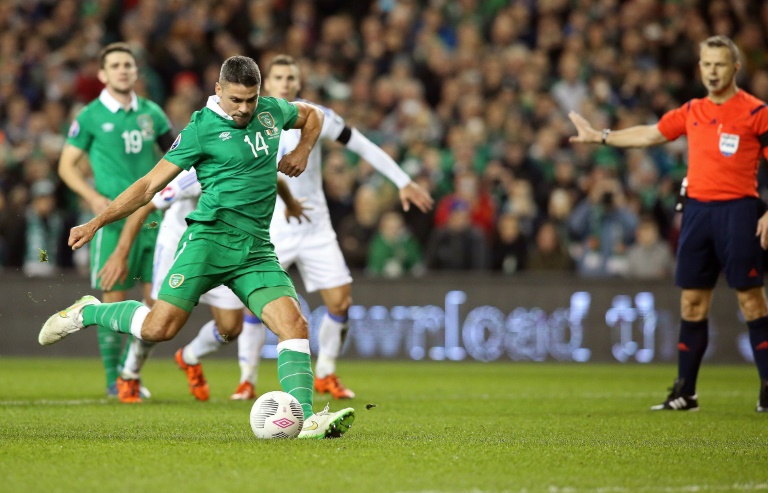 Jon Walters was the toast of Lansdowne Road as his brace against Bosnia-Herzegovina in a 2-0 victory fired Ireland to next summer’s European Championship Finals in France.

The Stoke City striker missed Friday’s play-off first leg through suspension but he more than made up for that with a goal in each half that saw Martin O’Neill’s men progress 3-1 on aggregate.

“It’s unbelievable — I couldn’t have written that script. Thankfully I got to play some games and we’re through — that’s all that matters,” Ireland goalkeeper Darren Randolph told Sky Sports.

Bosnia manager Mehmed Bazdarevic will be bitterly disappointed with his side’s poor showing, but for Ireland it was the most complete performance of a roller coaster campaign, on the most crucial night.

The hosts were simply better in every department, bullying the visitors in the first half and taking their chances when they arrived.

With an away goal advantage, Ireland could have set out to merely defend, but O’Neill sent out a team to attack with Walters starting while retaining the set piece skills of Robbie Brady â€“- who scored in Zenica â€“- at left back.

Bazdarevic made three changes to his team with Sead Kolasinac, Ongjen Vranjes and Haris Medujanin starting as he returned to a typical 4-2-3-1 formation, with Edin Dzeko spearheading the attack.

Ireland came into the game on the back of eight home games without defeat, with last month’s victory over Germany the standout result, but few of the home crowd expected anything less than a tense night.

How wrong they were.

While Bazdarevic vowed to attack, Bosnia’s first half performance was marked by indiscipline with Emir Spahic, in particular, fortunate to remain on the field.

Robbie Brady and Jeff Hendrick were central to the best of Ireland’s play, with much of the attacking play directed at Bosnia’s right wing.

Though Brady’s crossing was erratic, he continued to worry the Bosnian defence with Asmir Begovic and Ervin Zukanovic both required to make last ditch clearances from his deliveries.

Miralem Pjanic wasn’t influencing things as he would have liked for the visitors, while Dzeko was also a fringe figure with just one off target shot to show at the break.

Spahic was the first to go into the referee’s book when he snapped into a tackle on Hendrick, and he was soon followed by Senad Lulic, protesting what was a questionable penalty award against Zukanovic, who handled Murphy’s cross.

Walters, increasingly central to O’Neill’s set up, was nerveless as he calmly found the bottom left of the goal, giving his former Stoke City team mate Begovic no chance.

Medunjanin had Bosnia’s best chance of the half but he failed to control his volley after Dzeko’s cushioned knockdown.

Ireland lived more dangerously in the first ten minutes of the second half with Clark, first, required to clear Medunjanin’s in-swinging free kick, and then Lulic should really have tested Randolph following good work by Edin Visca on the right wing.

O’Neill shuffled his deck before the hour, introducing the pace and energy of James McClean and Shane Long for the tiring Wesley Hoolahan and Daryl Murphy.

McClean and Long gave Ireland a new dimension in attack, but it was Walters who struck again in the second half -â€“ with Brady finally delivering the kind of precise set piece he’s shown before.

His whipped cross was too much for Vranjes to deal with and his attempted clearance fell kindly to Walters who showed great composure once more, volleying home past Begovic at the near post.

Long almost wrapped things up in the 75th minute when he chased down a hopeful punt from Glenn Whelan, and nipped ahead of the hapless Spahic, but the Southampton forward lost his footing at the crucial moment and sent his shot wide.

Vedad Ibisevic thumped a volley on to the crossbar in the dying seconds, but nothing was going to wreck the Irish party and the hosts celebrated a famous win that sees them into just a third ever European Championships.