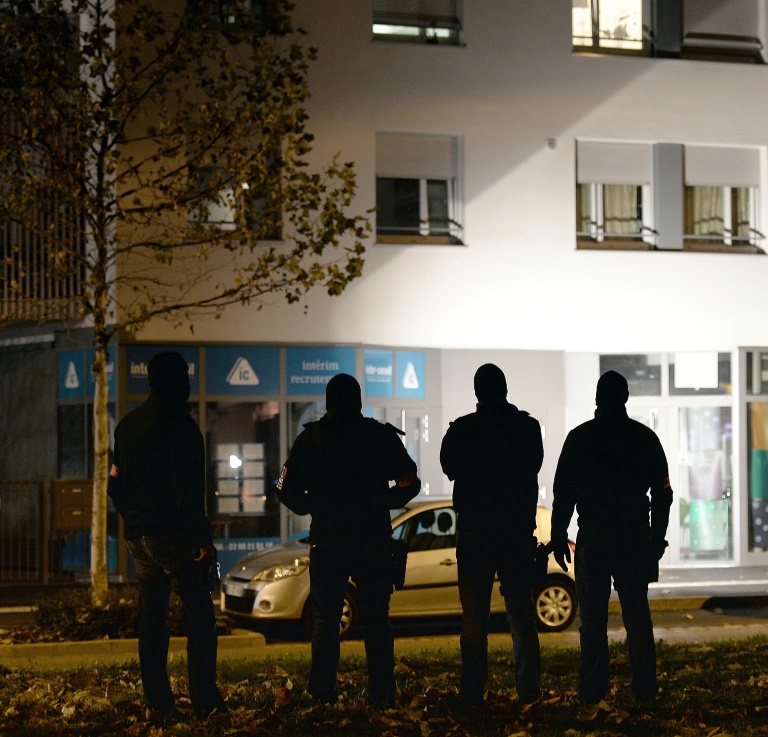 French police launched dozens of fresh raids across the country Tuesday and warplanes bombed Islamic State jihadists in Syria after President Francois Hollande vowed a merciless fight against the group that attacked Paris.

As France stepped up its investigation into the country’s worst-ever terror attacks that killed at least 129 people, security forces launched a series of dawn raids targeting scores of homes.

And after Hollande urged global unity to crush the jihadists, US Secretary of State John Kerry flew to Paris to show solidarity with his nation’s “oldest ally”.

“We agreed to exchange more information and I am convinced that over the course of the next weeks, Daesh (Islamic State) will feel greater pressure,” Kerry said after talks with Hollande.

Kerry said the French president would visit Washington in a week for further talks on the group he has described as “psychopathic monsters” after the massacre of scores of mostly young people in Paris on Friday night in attacks which also left hundreds maimed and wounded.

“I’m confident that over the next days, Paris, which knows how to rebound, will do so,” Kerry told reporters.

Stunned and grieving Parisians continued to flock to shrines of candles and flowers, while photographs of smiling young victims have been pasted at attack sites or outside their places of work.

The city is palpably more shaken after the January attacks which killed 17 people at Charlie Hebdo magazine and a Jewish supermarket, but many have defiantly returned to sidewalk terraces where they can be heard poring over the details of the unprecedented assault.

But a shadow still hangs over the City of Light four days after IS suicide bombers and gunmen struck as Parisians watched a France-Germany football match, a concert by Eagles of Death Metal, or enjoyed a night out at restaurants and sidewalk cafes.

The worst carnage took place in the Bataclan concert hall where 89 were coldly and systematically massacred before police stormed the theatre.

Police have launched a massive manhunt for 26-year-old Salah Abdeslam, one of two Belgium-based brothers implicated in the attacks. His sibling Brahim blew himself up outside a bar in Paris, seriously wounding one person.

Investigators believe Belgian jihadist Abdelhamid Abaaoud, who is based in Syria and knew Salah Abdeslam, may be the mastermind of the attacks.

Abaaoud has boasted in videos about planning attacks in Europe, and was in July sentenced to 20 years in absentia in Belgium over a thwarted plot to murder police officers.

“We don’t know if there are accomplices in Belgium and in France… we still don’t know the number of people involved in the attacks,” French Prime Minister Manuel Valls said.

Five of seven gunmen and suicide bombers killed during the attacks have already been identified.

Four of them are French nationals, and at least two of them are known to be among the hundreds of French people who have gone to fight in Syria.

The return of such radicalised, war-hardened jihadists has put a heavy strain on the security forces, who have come under the spotlight after the second mass terror attack in 10 months.

IS has repeatedly urged assaults on France which has seen a litany of attacks and foiled attacks since January, from a man who beheaded his boss to another who was overpowered as he opened fire on a high-speed train.

The French minister in charge of transport, Segolene Royal, said she wanted security gates at the access of all local and international trains.

This proposal followed a raft of measures unveiled by Hollande in a historic speech to parliament on Monday, in which he called for an extension of the state of emergency by three months and announced 8,500 new jobs to help counter terrorism.

A government source told AFP that those returning from Syria could be placed under house arrest and said the presidency was considering amending the constitution to allow for tougher security measures.

In the latest outpouring of international empathy for the French trauma, England fans have been urged to join in a rendition of the French anthem La Marseillaise before France returns to action in a friendly match against England in London later Tuesday.

The words “Liberte, Egalite, Fraternite” in the colours of the French flag lit up Wembley Stadium, where the match will be played.

The big screens at the famous London stadium will display the words, which were also printed on the back of The Sun and Daily Mirror tabloids — normally bastions of footballing patriotism.

The Sun instructed readers to “sing for France”.

Hollande has vowed to hit back at IS “without mercy” and in the Syrian city of Raqa, the stronghold of IS, French warplanes destroyed a command centre and training centre in its second series of airstrikes in 24 hours.

Friday’s “acts of war… were decided and planned in Syria, prepared and organised in Belgium (and) perpetrated on our soil with French complicity,” Hollande told the extraordinary meeting of both houses of parliament in Versailles.

Hollande also said the French aircraft carrier Charles de Gaulle would be deployed to the eastern Mediterranean to “triple our capacity to take action” against IS in Syria.