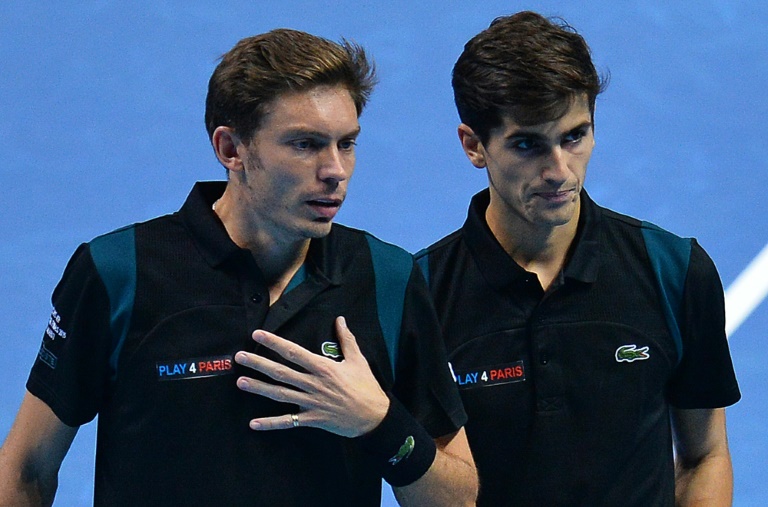 Wearing badges in honour for the victims, the French pair of Nicolas Mahut and Pierre-Hugues Herbert played on Monday in memory of “events that took place in Paris” as they made their debut at the ATP Tour Finals doubles event in London.

“We’re playing for ourselves but also because of what took place in Paris,” said Mahut in a reference to a series of deadly attacks across the French capital last Friday that killed 129 people.

“I had chills as I walked out on court. It was a very special atmosphere,” admitted Mahut after he and Herbert suffered a 3-6, 7-6 (7/4), 10-7 defeat at the hands of Croatia’s Ivan Dodig and Brazil’s Marcelo Melo.

At one stage, lights in the O2 were dimmed with the perimeter of the court lit up in the colours of the French national flag with the words “Play 4 Paris”.

The winners of this year’s US Open doubles title, Mahut and Herbert wore discreet badges on their shirts also bearing the words “play for Paris” and on their chairs they draped T-Shirts emblazoned with the inscription “pray for Paris”.

Mahut’s racquet was also fitted with an anti-vibration device which carried a peace symbol.

“It was a difficult situation,” said Mahut. “But you have to go on, you can’t shut yourself away from the world.

“We want to continue doing the things we enjoy and which hopefully give pleasure to others, just as people should continue going to concerts,” he added, with Paris’s Bataclan concert hall one of the venues that came under attack on Friday.

Despite the difficult circumstances, the French pair made a good start to the first of their three group ties and at one stage led 6-3, 5-3, with two match points.

But Herbert served three double faults in that game and it proved to be a turning point in the match.

“Maybe I let my emotions get the better of me,” Herbert explained.