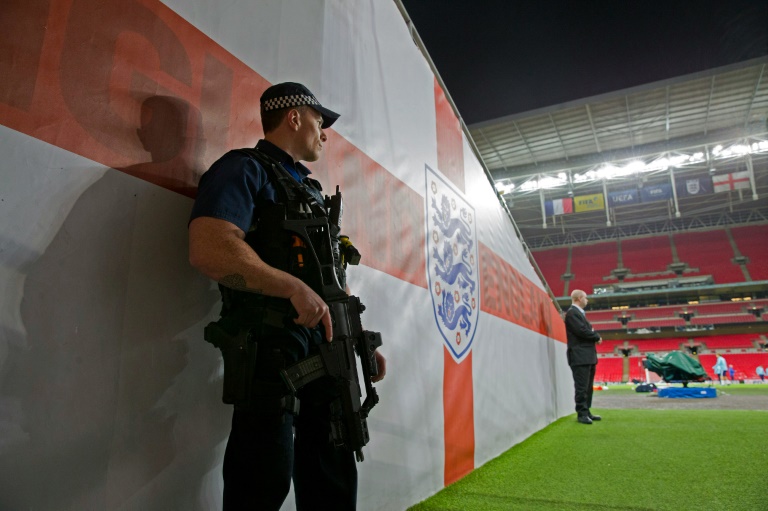 Armed police were present inside London’s Wembley Stadium while France conducted a training session at the ground ahead of Tuesday’s friendly against England as part of increased security measures following the Paris attacks.

The bulk of British police officers, unlike many of their counterparts elsewhere in the world, do not carry guns as part of their day-to-day equipment and it is rare to see armed police at a sporting fixture in the UK, let alone a training session.

But police carrying sub-machine guns, side-arms and electronic tasers and clad in bullet-proof vests were present in the players’ tunnel, next to the pitch, at Wembley during France’s pre-match training session on Monday.

“We want everyone coming along to the match to know that officers will be out there in increased numbers, to keep them safe,” said Deputy Assistant Commissioner Peter Terry in a statement.

“This will include extra, highly visible, armed officers who will be patrolling around Wembley Stadium.

He added: “Our plans are purely precautionary and not as a result of any specific intelligence.”

Terry asked that ticket holders should arrive early ahead of the 8:00pm local time (2000 GMT) kick-off at the north London ground and warned that there would be “additional entry searches” at Wembley that could take longer than usual.

Among those attending the match will be Prince William, the second in line to the British throne, in his role as president of England’s governing Football Association.

A royal source told Britain’s Press Association that William would be attending out of “solidarity to the people of France”.

London mayor Boris Johnson is also set to be among an estimated 70,000 crowd at a Wembley ground with a capacity of 90,000.

“Of course we can never be complacent, and tomorrow’s game will be policed appropriately, but I can’t think of a better riposte to this ideology of hate than to carry on with our lives, our loves and our passions,” said Johnson.

“Football is one such passion, and it is absolutely right that tomorrow’s match is to go ahead and that England supporters will be able to come together with their French cousins in solidarity and remembrance to enjoy international football at its very best.”

The cousin of France midfielder Lassana Diarra was one of at least 129 people killed, while the sister of his team-mate Antoine Griezmann escaped unhurt from the assault on the Bataclan concert hall.

Meanwhile a spokesman for England’s elite Premier League said new security guidance would be issued to its 20 member clubs later this week following the Paris attacks.