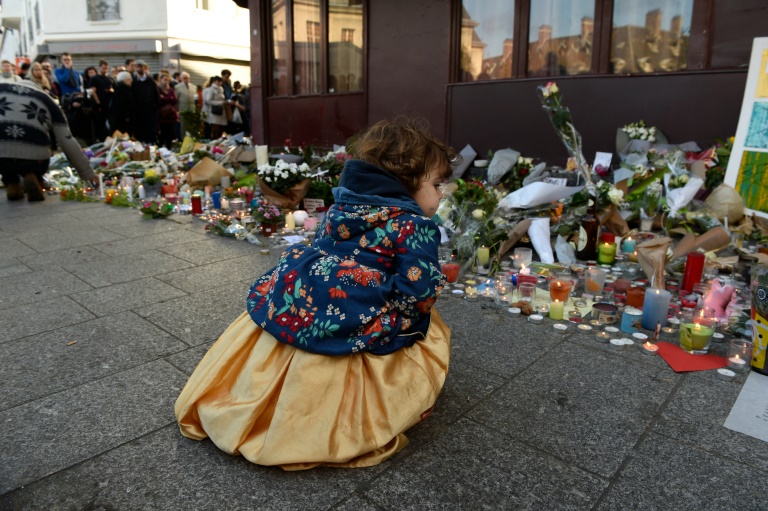 The Paris attacks might be over, the bloodshed might have halted, but what it has left behind is far from normalcy.

“Why are the people crying, Mummy?” a little girl out for a Sunday afternoon cycle with her parents asked, as she passed the crowds gathered on the street corner where the killing began in central Paris.

“They are very sad,” her mother said as she tried to navigate the groups standing silently and awkwardly facing the Petit Cambodge restaurant and the Carillon cafe, trying not to look at the patches of bloodstained sand on the pavement where the 14 people who died there fell.

“But why are they sad?” the girl persisted.

“Because there are no answers,” said Benedicte Joffre, who was there with her 11-year-old son. “And because this time we are more afraid.”

She had come to this corner of the 10th arrondissement near the Canal St Martin that is the acme of a trendy multicultural Paris of halal butchers, hipster hangouts and Jewish synagogues because she was feeling the same “unbearable sadness” into which the French capital has been plunged.

“This time it is different,” she said referring to the Charlie Hebdo and kosher supermarket attacks in January. “It is much wider, it is about terrorising us all.”

“In January they attacked a certain idea of freedom, the freedom of the press but this time it is our whole society that they have attacked,” she said.

“The fact that women can go out in the evening to a cafe terrace, that women can have their say, and that you must respect your neighbour. It is our way of being.”

Across the canal at Place de la Republique, which became the symbol of France uniting in the face of the earlier killings, there were tears, steely defiance, but also fear.

Helene Lagoutte had brought her four-year-old daughter Jeanette to watch people light candles and write messages at the foot of the giant statute of Marianne, the female figure who embodies the secular values of the French republic.

“I have explained to my daughter that people who were angry with France came and killed people and that it was wrong. I wanted to talk to her first because kids talk at school.

“I have tried to talk to my older boys too about Islam, and what happened in Algeria (a former French colony) because a lot of my 12-year-old’s friends are Muslim, and I didn’t want him to think that they were to blame.”

She said France was more traumatised by these killings, not just because more people had died than in January, but because the jihadists had targeted “all of us”, not just the Jewish community or journalists who had angered them.

“That is why we must stand together, and why I would appeal to the Muslims of France and to their leaders to speak out and to demonstrate in the streets against this, to show that this is not them. They must. If not, I am afraid to think what will happen.”

Half overhearing what was being said, Mehdi, 43, a Paris binman, began to cry. “I am so ashamed. I don’t know how I am going look my colleagues in the eyes. But they must know this is not what is is to be a Muslim. I just want to hold them and to say I feel the same” as them.

He said he was afraid of what these attacks would do to the France in which his children were growing up as third-generation immigrants. “We are French too, we are,” he insisted.

He said neither he nor his wife had slept more than an hour since Friday. “I couldn’t put off the television and I am so upset and angry. My wife was crying in the bed beside me, saying she is going mad. I just had to get out of the house.”

This will not be the end of the bloodshed, Meir, an Orthodox Jew whose family survived Auschwitz, warned, as heads turned at the sound of police sirens.

“This will not be the last (attack). They will keep on attacking us,” he said.

Many felt the Jewish victims of the kosher supermarket attack in January had been forgotten in the outpouring of grief at the murders of the Charlie Hebdo cartoonists, he said.

“And on Facebook already they are saying that the Jews are behind this too…,” he said referring to anti-Semitic conspiracy theories swirling on the Internet.

Benedicte Joffre, who said she was the great grand-niece of France’s World War I military leader General Joffre, argued that its democratic values were worth fighting for. “It is what our ancestors did, and we have to, too.”

But she was afraid that reaction to the attacks might deepen social division in France by “helping the extremes in our country. It is manna from heaven for the (far-right) National Front. It is easy to say it is their (Muslims) fault.

“Although the attacks are an act of war, we are not at war,” she insisted.