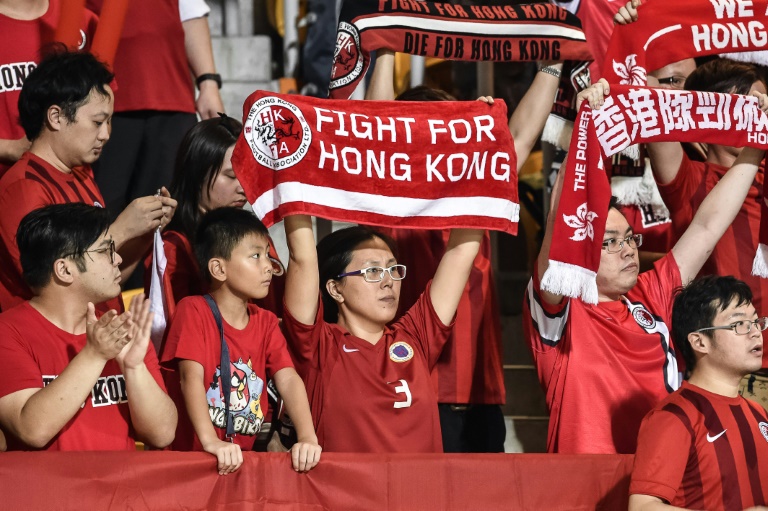 Around 1,200 police officers will be on standby for the match, according to local media reports, or about one for every five fans at Hong Kong’s 6,000-seat Mong Kok Stadium.

Officials have also warned fans to behave themselves after booing of Hong Kong’s “March of the Volunteers” anthem — which the territory shares with China — prompted FIFA to fine the Hong Kong Football Association more than $5,000.

“We are separating the audience from mainland China and Hong Kong, even for the toilets,” HKFA chairman Brian Leung said Sunday.

“I think the chances of them meeting each other is very, very little,” he added. “I urge fans to stay calm… show your sporting spirit.”

The densely packed Mong Kok commercial district was also the scene of the most violent clashes between police and protesters during last year’s “Umbrella movement” pro-democracy rallies.

The match is critical to both Hong Kong and China’s chances of reaching the 2018 World Cup in Russia as they lie second and third respectively in Group C, after drawing 0-0 under heavy security in Shenzhen in September.

Hong Kong, currently on 13 points, have only one game left after Tuesday’s match, away against group leaders Qatar in March. China are on 10 points but have a game in hand.

On Tuesday, fans will enter the stadium through different gates and will be given separate bathrooms and food kiosks in two segregated areas, divided by security officers, organisers said. About 500 away fans are expected.

Tickets for the game sold out within hours earlier this month, with demand bringing down the organisers’ website and reports that tickets are now being touted for 10 times their original price.

Assistant district commander Yu Wai-kit told a press conference on Sunday that “adequate” manpower would be deployed to ensure the event took place in a “peaceful manner”, without confirming the numbers.

Elsewhere, Australia will also play their away tie with Bangladesh under heavy security after Australia’s cricket tour of the country was cancelled over safety fears.

Malaysia’s home game against UAE will be held behind closed doors at Shah Alam Stadium on orders of FIFA, after flare-hurling fans forced the hosts to abandon a qualifier against Saudi Arabia in September.

Thai fans will be closely watching events in Kaohsiung, where hosts Taiwan can put them into the next round if they avoid defeat to Iraq in Group F.

Eight group winners and the four best-placed runners-up will proceed to the next stage of qualifying for the 2018 World Cup in Russia, and also earn a berth at the 2019 Asian Cup in the UAE.