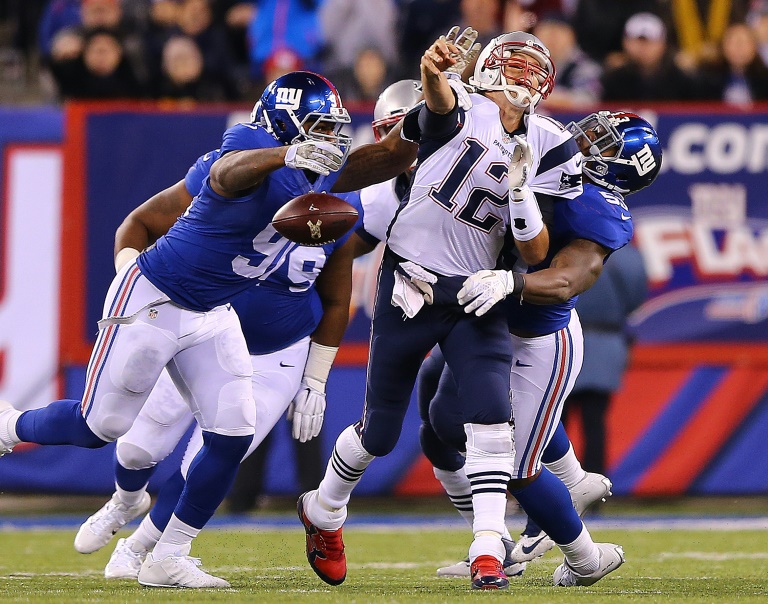 The New England Patriots stretched their NFL season-opening win streak to nine games as Stephen Gostkowski’s field goal with one second left lifted them to a 27-26 win over the New York Giants.

The Patriots rallied for the win against a Giants team that gave them their toughest test of the season.

Superstar quarterback Tom Brady was almost intercepted by New York’s Landon Collins on the Patriots’ final drive, but the rookie safety dropped the ball when he landed awkwardly on his neck.

Brady piloted the Pats into Giants territory with four seconds remaining and Gostkowski sealed the win.

“All I really think about is don’t kick the ball too hard because a lot of times when I miss kicks, it’s when I really try to kill it,” Gostkowski said.

It had looked like the Giants again had New England’s number — just as they did when halted the unbeaten Patriots’ march toward immortality with a Super Bowl win to cap the 2007 season.

Four years later the Giants would beat the Patriots in the Super Bowl again.

Shortly before that, the Giants thought they had a touchdown when quarterback Eli Manning connected with wide receiver Odell Beckham, Jr. in front of cornerback Malcolm Butler in the end zone.

However, replay showed Butler batted the ball out of Beckham’s hands before the receiver’s second foot was on the ground and the call of a touchdown was overturned.

“I lost us the game with the play down in the end zone, a play that should have been made,” Beckham said. “You can’t leave it up to the officials to get anything right.”

Manning missed another throw to the end zone and they settled for the field goal — which proved too little to keep the Pats at bay.

“They played great,” Brady said of a Giants team that sacked him three times.

“We didn’t play our best, but we made enough plays,” added Brady, who was robbed of favorite target Julian Edelman when the wide receiver exited with a broken foot in the first half.

The Carolina Panthers also improved to 9-0, with a 27-10 victory over the Tennessee Titans in Nashville where Carolina quarterback Cam Newton completed his first 11 passes, eventually completing 21 of 26 for 217 yards and one touchdown despite being sacked five times.

The Cincinnati Bengals, already off to the best start in franchise history, will try to join New England and Carolina at 9-0 on Monday when they host the Houston Texans.

NFL teams across the country held a moment of silence before Sunday’s games in honor of the victims of Friday’s attacks in Paris and their families.

The league said there was also “an increased security and law enforcement presence” at stadiums.

It was about the only bright spot of the day for Manning, who was benched after throwing four interceptions in a 29-13 loss to the Kansas City Chiefs.

Elsewhere, the Arizona Cardinals strengthened their grip on the NFC West with a 39-32 victory over division rivals Seattle.

Arizona offensive lineman Mike Iupati hurt his neck when he was laid out in a scary second-quarter moment, but MRI and CT scans at a Seattle hospital were “normal” according to the Cardinals and he had returned to the stadium by the end of the game.