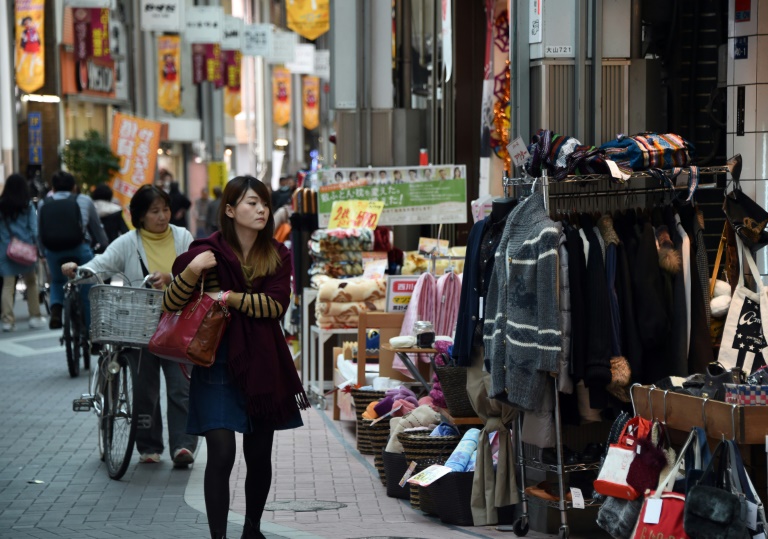 Japan’s economy, once Asia’s biggest, has been overtaken by giant neighbour China in size, while the smaller country struggles with a challenging demographic outlook that is expected to see its population shrink by the tens of millions in coming decades.

Still, it boasts some of the world’s biggest companies and banks and its domestic technology plays a key role in a wide array of global industries, including automobiles, electronics and machinery.

The figure, which is preliminary, was marginally worse than the market expectation for a 0.1 percent decline, according to a Bloomberg News survey, and followed a similar shrinkage in the previous quarter.

The data are likely to provide fresh fodder for the Bank of Japan, the central bank, which has embarked on an aggressive bond-buying programme aimed at ending deflation and boosting growth.

The BoJ is scheduled to hold a policy meeting this week with attention focused on whether it will expand its monetary easing.

The latest data offer a relatively fuzzy snapshot of Japan’s economy, characterised by improving consumption but weakening corporate investment due to uncertainty over the Chinese and other foreign economies, experts said.

“The real economy is at a standstill, even though other aspects of ‘Abenomics’ — corporate earnings and stock prices — are improving,” Taro Saito, director of economic research at NLI Research Institute, told AFP.

“Companies are reluctant to invest despite their sound profits,” he said, adding that while consumer spending improved “its overall trend still remains weak”.

Still, analysts broadly expect the economy to pick up in coming quarters, as Abe is seen preparing a fresh stimulus package to boost growth, though it will likely remain tepid.

“Details are not as bad as the figures might suggest,” said Junichi Makino, economist at SMBC Nikko Securities, citing declines in inventories and increasing imports.

Akira Amari, the government minister in charge of revitalising the economy, put a largely positive spin on the figures, saying in a statement that the “business climate is expected to recover gradually”, citing rising wages as a bright factor.

Marcel Thieliant, economist at Capital Economics, said, however, that any recovery should be viewed with caution.

“Looking ahead, the economy should start to recover this quarter, but we think that growth in the current fiscal year will be closer to 0.5 percent rather than the 1.2 percent projected by the Bank of Japan at its end-October meeting,” he wrote in a note to clients.

Thielient said that he expected the Bank of Japan to hold off for now but expand its easing programme in January.