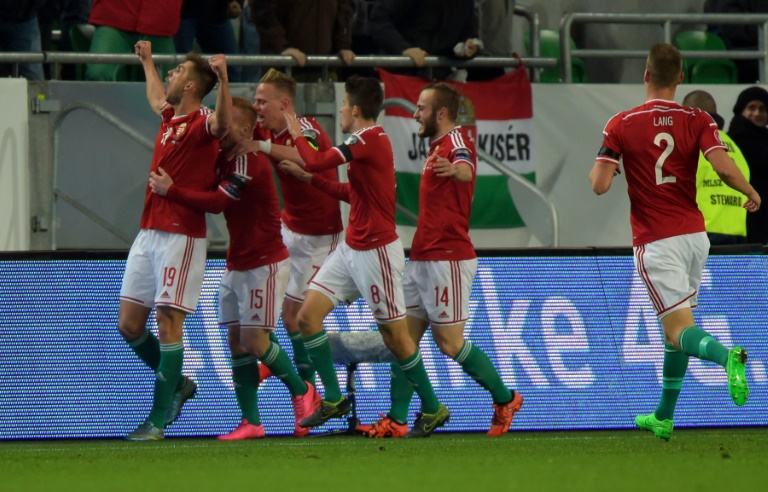 Hungary reached their first major finals since the 1986 World Cup when they defeated Norway 2-1 on Sunday for a 3-1 aggregate victory in their Euro 2016 play-off.

Tamas Priskin scored the opening goal of the game with a spectacular 14th-minute strike before an own-goal from Markus Henriksen seven minutes from time gave Hungary a place in the finals in France next summer.

Henriksen then scored at the other end in the 88th minute to make up for his error but it was too little, too late for Norway, whose last appearance at the Euros was back in 2000.

Hungary had gone into the game in the ascendancy after midfielder Laszlo Kleinheisler had marked his international debut with the only goal of the first leg in Oslo on Thursday.

It didn’t take them long to add to their advantage at the Groupama Arena on Sunday.

In the 14th minute, a long ball down the left flank from Tamas Kadar found Priskin.

It was his 17th goal in 54 international appearances.

Skipper Balazs Dzsudzsak was then set-up by Priskin but his chance to extend the lead was blocked.

Norway’s Haitam Aleesami had a close-range opportunity saved by Gabor Kiraly, who was making a record-equalling 101st appearance for Hungary, with Even Hovland then heading the resulting corner wide of the mark.

Hovland was again unlucky on the stroke of half-time when his header came back off the post.

Sweden continued to press after the interval but it was Hungary who came closest to another goal just before the hour mark when a shot from Dzsudzsak took a deflection and bounced off the top of the crossbar.

Dzsudzsak then saw Nyland dive to his left to turn a shot from the edge of the box around the post.

As time ticked away, Marcus Pedersen was denied by Kiraly after Richard Guzmics deflected an Alexander Tettey attempt into the path of the substitute.

It was all over seven minutes from time when Henriksen diverted a Marco Bode flick into his own goal.

Henriksen then scored at the right end of the pitch but it only delayed the Hungarian celebrations.

On Monday, the Republic of Ireland will face Bosnia-Herzegovina in Dublin with the tie level at 1-1 after the first leg in Zenica where Robbie Brady’s strike was cancelled out by Edin Dzeko.

The play-offs conclude on Tuesday with Slovenia facing Ukraine having lost the first leg 2-0 in Kiev.

In Copenhagen, Denmark tackle Sweden having lost the first leg 2-1 in Solna on Saturday.