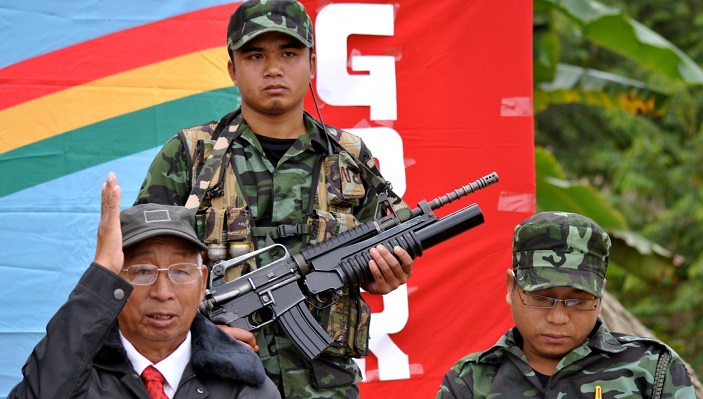 National Socialist Council of Nagaland-Khaplang (NSCN-K), a group which is allegedly responsible for killing of 18 army personnel in Manipur, has been declared a terrorist organisation under the stringent anti-terror law.

In a gazette notification issued recently, the government declared NSCN-K, all its front organisations and formations as a terrorist organisation under the Unlawful Activities (Prevention) Act, 1967, a Home Ministry spokesman said.

The group, which had signed a peace agreement in March 2001, had withdrawn unilaterally from the ceasefire agreement in March 2015 after it was alleged that the area along Indo-Myanmar border being under their control was fast turning out to be ‘safe-zone’ for terrorists of ULFA faction led by Paresh Barua, the NDFB led by IK Songbijit, and the Meitei armed groups like the People’s Liberation Army of Manipur.

The spokesman said that the NSCN (K) had resorted to terrorism by killing innocent civilians and security forces and engaged in other violent activities including the June four attack on an Army convoy in Chandel district of Manipur.

This case is being probed by the NIA, which has announced a bounty of Rs 17 lakh for providing information about two top leaders of militant NSCN-K including its chief S S Khaplang who were allegedly behind the strike.

The probe agency declared a cash reward of Rs seven lakh for Khaplang while a Rs 10 lakh bounty was announced for Niki Sumi, self-styled chief of the armed wing of NSCN-K, who is alleged to have led a group of rebels on June four.

Khaplang is a resident of Myanmar while Sumi hails from Nagaland. There are reports that 75-year-old Khaplang was in a hospital and later shifted to Taga, a place which is at a junction of India-Myanmar-China border. Army trucks were attacked with ‘Lathod guns’ and grenades by suspected terrorists of NSCN (Khaplang), killing 18 soldiers and injuring 15 others in the Manipur attack.

The militants had formed three groups to carry out the attack and explosive-laden cans were planted alongside the road to maximise the damage, the sources said.

NSCN(K), which walked out of a ceasefire agreement with India in March this year, has been involved in a series of attacks in tandem with some other militant groups in the North-East under the banner of ‘United Liberation Front of South East Asia’.