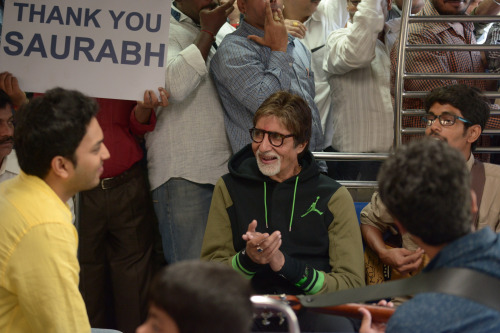 It’s not everyday that Bollywood stars travel in a local train. And here’s the Shehenshah of Bollywood himself seen boarding a crowded Mumbai local and singing merrily like an ordinary Mumbaikar.

Amitabh had invited Mumbai lad, Saurabh, who sings in local trains and donates the money collected to cancer patients, to his TV show Aaj Ki Raat Hai Zindagi. After making Saurabh a household n on national television, the megastar even paid him a visit on Sunday in a Mumbai local train. The excitement did not end there. Big B decided to sing with Saurabh.

T 2059 -Local from VT to Bhandup to support Saurabh, who sings in locals for charity to cancer .. sang with him .. pic.twitter.com/K3WiabhYU7

This is possible with @SrBachchan only. He is so humble even after so many achievements #BigBAurHeroKaSafar pic.twitter.com/utrRz8y1eq

He not just says but also does it. @SrBachchan goes out of way for joy ride & now #BigBAurHeroKaSafar pic.twitter.com/Wq086S9MKW

Being a Big celeb and go in a train and sing needs valor @SrBachchan. Really astonishing #BigBAurHeroKaSafar pic.twitter.com/QAaGtjfqRK

On his blog, Big B wrote that the journey was not a ‘PR exercise’ and “was executed quietly without Saurabh’s knowledge, as a surprise for him and for the many that travel daily with him.”