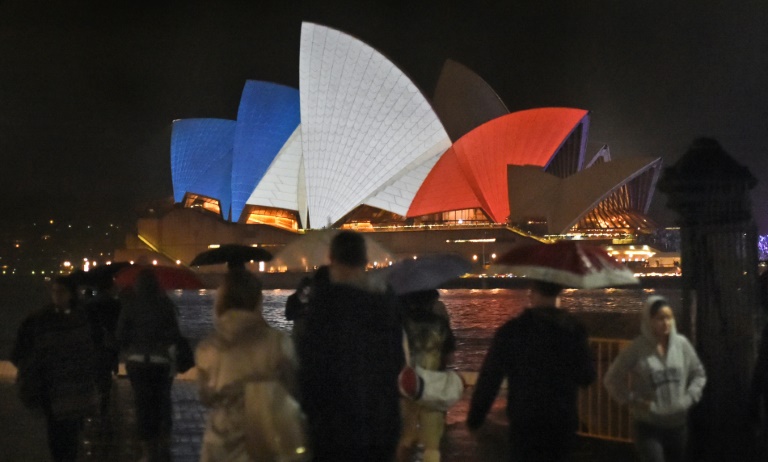 Stirring renditions of “La Marseillaise” rang out Saturday from Dublin to New York as global landmarks were bathed in the French colours and thousands marched in solidarity with Paris after attacks that at least 129 dead.

Monuments from the Sydney Opera House in Australia to One World Trade Center in New York have been adorned with France’s red, white and blue, while the “Peace for Paris” symbol combining the city’s beloved Eiffel Tower with the peace sign of the 1960s went viral online.

Many of the 6,000 participants in a march in the Irish capital were draped in the French blue, white and red flag, while others also sang the national anthem.

London paid homage to the victims with some two thousand people gathering at an evening vigil in the capital’s Trafalgar Square, where fountains and the grand portico of the National Gallery opposite were lit to resemble the Tricolour.

The Eiffel Tower, the symbol of the so-called city of light, was however shrouded in darkness and would remain closed “until further notice”, a spokeswoman told AFP.

Bouquets, candles and messages of condolence were laid at French embassies worldwide.

A Twitter campaign has begun encouraging notoriously tribal England football fans to join with French travelling supporters in singing “La Marsellaise” before the kick-off in the friendly match between both countries.

The European Union called for a minute’s silence to be held Monday for the victims of the attacks.

In Madrid and Barcelona, hundreds stood for a minute’s silence outside city hall.

US President Barack Obama, citing France’s national motto, said “we are reminded in this time of tragedy that the bonds of liberte, egalite, fraternite, are not just the values French people share, but we share”.

Indian Premier Narendra Modi called the attacks “anguishing and dreadful” and Hassan Rouhani of Iran condemned them as “crimes against humanity.”

NATO chief Jens Stoltenberg stressed that the Paris attacks were not part of a fight between the Islamic world and the western world.

“This is a fight between extremists, criminals and people who believe in the fundamental values of freedom and the respect for human rights,” he told AFP.

However Syrian President Bashar al-Assad said France’s “mistaken policies… have contributed to the spread of terrorism”.

“France has got to know what we live with in Syria,” he added.

The outpouring of solidarity generated massive amounts of activity on social media, with the hashtags #prayforparis and #jesuisparis going viral.

A “Peace for Paris” symbol, combining the city’s Eiffel Tower with the peace sign, has gone viral on the Internet.

The designer 32-year-old London-based French graphic artist Jean Jullien, said “given the scale of the violence, the peace-and-love symbol was essential.”

– “Our hearts go out to all the victims and their families across the city tonight.”: Irish rock band U2