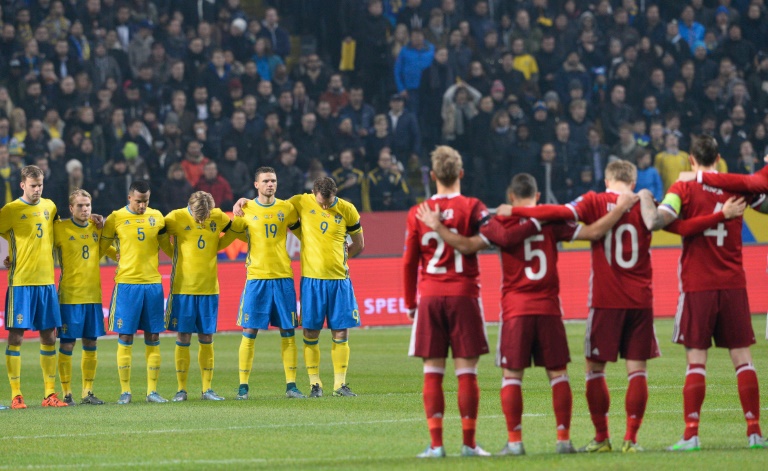 A minute’s silence was observed before Saturday’s games for victims of the Paris attacks on Friday, one of which was outside the Stade de France where world champions Germany were playing a friendly against France.

In Solna, Paris Saint-Germain star Zlatan Ibrahimovic scored his ninth goal in as many qualifiers as Sweden took a slight advantage over 1992 champions Denmark.

Ibrahimovic converted a second half penalty after Emil Forsberg had scored his first international goal on the stroke of half-time.

But substitute Nicolai Jorgensen grabbed an away-goal lifeline for Denmark 10 minutes from time ahead of the second leg in Copenhagen on Tuesday.

A backheel from Jimmy Durmaz allowed Mikael Lustig to sprint away down the right flank and his pass reached Forsberg at speed and the Leipzig winger buried a first-time shot into the corner past Kasper Schmeichel.

The Denmark goalkeeper rescued his team just before the half-time whistle with a diving save to deny Ibrahimovic’s power-packed free-kick from just outside the box.

Ibrahimovic made it 2-0 five minutes into the second period, converting a penalty after Thomas Kahlenburg had clumsily tripped Forsberg.

It was the 34-year-old’s first goal against the Danes in seven matches. But with 10 minutes left, substitute Jorgensen latched onto a Yussuf Poulsen flick-on from an Eriksen corner to boost Denmark’s hopes of making the finals in France next summer.

Earlier Ukraine took a comfortable 2-0 lead over Slovenia in Lviv as Andrei Yarmolenko and Yevhen Seleznyov scored in either half of a bad tempered clash at the packed 65,000-seat Lviv Arena.

Ukraine, who have lost all five of their previous qualifying play-offs for major tournaments, dominated early but Samir Handanovic proved solid in the Slovenian goal in the opening 20 minutes.

But in the 22nd minute Yarmolenko picked up a rebound after Handanovic failed to clear Yevhen Konoplyanka’s cross and slotted inside the far post with a low shot.

Slovenia poured into attack and midfielder Josip Ilicic missed a clear chance to level after 27 minutes.

After the break, Ukraine continued to press forward and in the 54th minute Seleznyov got the second with a close range shot off an Artem Fedetskiy cross.

Martin O’Neill’s Republic of Ireland will be bidding to carry on from where they left off in their 1-1 first leg draw away to Bosnia in Dublin on Monday as Hungary edged closer to their first international tournament in 30 years when they defeated Norway 1-0 on Friday.

Shorn of a host of experienced stars like Shay Given, John O’Shea, Jon Walters and Shane Long, and with a handful of players one booking away from suspension, the Irish were more hopeful than expectant.

But Robbie Brady’s 81st-minute strike, combined with some determined defending, saw them return to Dublin’s Lansdowne Road with a vital away goal, although there was still time on Friday for Bosnia’s Edin Dzeko to equalise.

“Everybody walked off the field (fit) and in terms of other players like Glenn Whelan, Seamus Coleman, Marc Wilson…all those people (avoided bookings), so in that sense it’s really good news,” O’Neill said.

On the day that Hungarian international goalkeeper Marton Fulop lost his battle with cancer at the age of 32, his teammates honoured his memory with a crucial victory ahead of Sunday’s return in Budapest.

Midfielder Laszlo Kleinheisler marked his international debut with the game’s only goal in the first half before Hungary, whose last major event was the 1986 World Cup in Mexico, soaked up constant pressure from the home side to preserve their advantage.