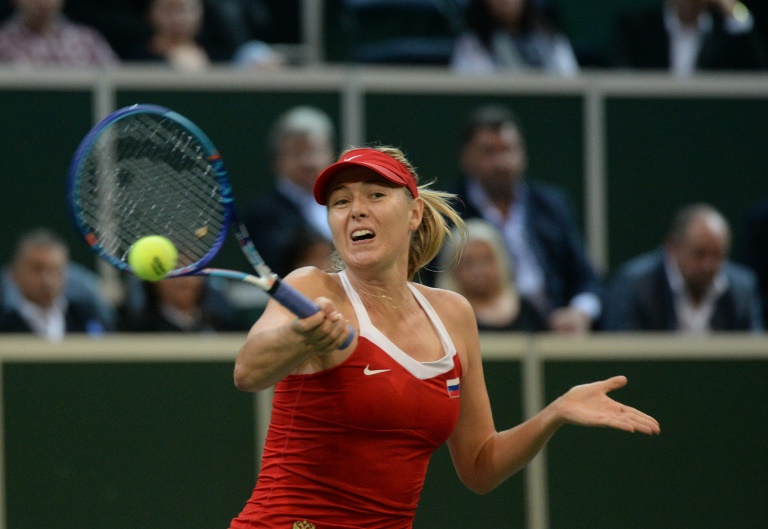 Maria Sharapova won her first ever meeting with Karolina Pliskova 6-3, 6-4 to hit back for Russia in the Fed Cup final against holders Czech Republic in Prague on Saturday.

World number six Petra Kvitova earlier came back from a set down to beat 28th-ranked Anastasia Pavlyuchenkova on the hardcourt of the sold-out O2 Arena 2-6, 6-1, 6-1 as the champions took a 1-0 lead.

Big hitters Sharapova, the world number four, and 11th-ranked Pliskova traded breaks halfway through the first set but the Russian, playing only her fifth Fed Cup tie, added another in game eight to outpower her rival.

The 23-year-old Pliskova broke Sharapova early in the second set, but Sharapova, 28, broke back twice to win the set as Pliskova squandered three break points in game eight.

“I was nervous throughout the whole match and made some errors at inappropriate times but overall I’m just really happy that I could win,” said Sharapova, a five-time Grand Slam winner.

“I didn’t serve my best and that’s something that I’ll definitely need to improve for tomorrow,” added Sharapova, who collected nine double faults in the rubber.

Pliskova blamed her loss on a poor first serve.

“She goes after the second immediately and creates pressure and then it’s terribly hard,” she said.

“I could have played better, I had my chances.”

The first rubber got underway following a minute’s silence for the victims of Friday’s Paris terror attacks. Kvitova got off to a stumbling start, piling up unforced errors and serving poorly.

“I was very nervous from the start, in fact throughout the first set,” said Kvitova.

“My hands didn’t fly (as) I wanted, my legs were very heavy and I couldn’t really move well.”

But the first-set flop turned out a perfect wake-up call for the 25-year-old Czech who converted her sixth break point in game two of the second set and powered past her helpless rival for a 6-1 win.

“I was trying to hold my serve in the second set and then I had an opportunity to break her,” said Kvitova.

“I think that game was key for the second set and maybe for the match.”

Pavlyuchenkova agreed that game was crucial and insisted she “was a bit unlucky” to lose it.

“She started to feel more confident, she played much better, more aggressive, she broke my rhythm and I couldn’t find my game again,” said the Russian, who is now 2-7 head-to-head with Kvitova.

Kvitova, the 2011 and 2014 Wimbledon champion, retained her pace in the decider, sweeping the 24-year-old Pavlyuchenkova 6-1 again.

At the end of the third set, “I was thinking, oh gosh, I don’t want to be here anymore,” said Pavlyuchenkova.

In Sunday’s reverse singles, Kvitova will face Sharapova and Pliskova will then take on Pavlyuchenkova.

If the score is tied at 2-2, Czechs Lucie Safarova and Barbora Strycova are due to play against Ekaterina Makarova and Elena Vesnina in the final doubles rubber.

The Czechs are seeking their fourth title in five years and ninth overall, including five as Czechoslovakia which went on to split into the Czech Republic and Slovakia in 1993.

Russia, who are 2-3 head-to-head with the Czechs — including three ties between the former Czechoslovakia and the Soviet Union — have won four titles so far.