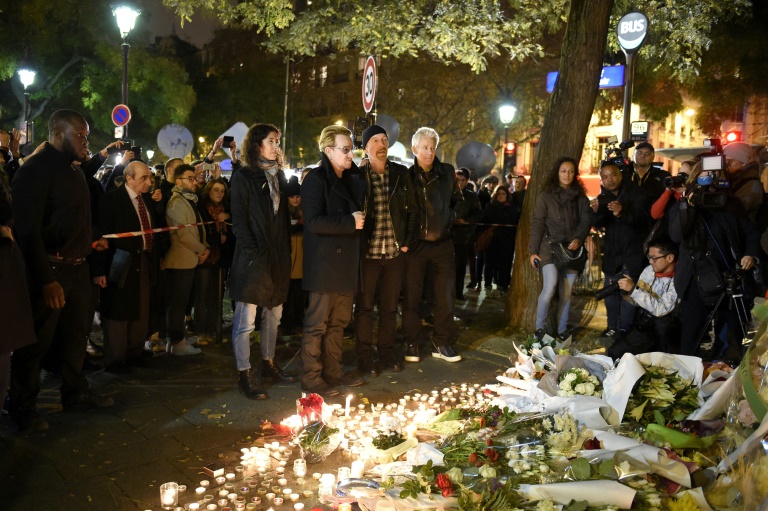 The assault on one of the leading concert halls in Paris has sent shockwaves through the music world, with top-selling artists including U2 and Foo Fighters calling off shows.

“Shocked, sad and angry. We are all Parisian today,” tweeted Peter Gabriel, one of many prominent musicians who took to social media after Friday’s night coordinated attacks in the French capital.

More than 80 people were killed inside the Bataclan concert hall as gunmen opened fire during a performance by the California rock band Eagles of Death Metal, an attack for which the Islamic State group took responsibility.

France’s Culture Minister Fleur Pellerin laid a bouquet of flowers Saturday in front of the Bataclan, a historic venue which is striking for its 19th-century chinoiserie architecture.

A short while earlier, an anonymous man brought a mobile keyboard near the entrance and played songs including John Lennon’s pacifist anthem “Imagine” under the eye of a pack of photographers.

The music industry was directly touched by the tragedy, with at least three employees of Universal Music France, part of the largest global label group, among the dead.

“The Universal Music family is in mourning,” tweeted Pascal Negre, president of Universal Music France, as he identified the dead by the first names Thomas, Marie and Manu.

“This is crazy. It’s normally a pleasant place where people come to relax and then it was hell,” said the television and radio presenter Pierre Janaszak.

The 35-year-old told AFP that he survived by hiding in the restrooms as the assailants took hostages and was freed in the police counter-assault.

Members of Eagles of Death Metal, a bluesy garage rock band known for lascivious lyrics but rarely politics, were unhurt and were set to return to the United States, although a crew member originally from England was killed, people close to the group said.

The Deftones, another California band who were in the audience ahead of their own since-cancelled shows at the Bataclan, were also safe and leaving Paris.

The Bataclan, which has a capacity of 1,500, is one of the most prominent Paris venues for successful but eclectic bands.

The night before the assault, the acclaimed electronic artist St Germain performed with an ensemble of Malian musicians.

“We are devastated. Our thoughts are with the victims and their loved ones,” the Bataclan’s owners, Jules Frutos and Olivier Poubelle, said in a statement.

“We are also thinking about our exemplary staff but also about the audience and artists present last night in our venue,” they said.

France imposed a state of emergency after the attack and the city Saturday closed all cultural venues.

U2 had already cancelled a concert Saturday at the 20,000-seat Bercy arena, the biggest covered concert hall in Paris, despite weeks of promotion for a live television broadcast on HBO.

The Irish rockers led by Bono later also appeared at the Bataclan to pay their respects.

U2, whose last concert tour was the highest-grossing in musical history and are winding down their latest global trek, also called off a second date at Bercy on Sunday.

Foo Fighters — whose frontman Dave Grohl has collaborated with Eagles of Death Metal — separately announced that the band was cutting short its world tour.

“In light of this senseless violence, the closing of borders, and international mourning, we can’t continue right now. There is no other way to say it. This is crazy and it sucks,” the band said in a statement.

Foo Fighters had been due to play at Bercy, also known as AccorHotels Arena, the day after U2 and also had shows left in Turin, Lyon and Barcelona.

But in contrast, another veteran rock band, Motorhead, will go ahead Sunday with a show.

The high-decibel heavy metal group led by Lemmy will play the Zenith, the second-largest indoor venue in Paris at 6,000 capacity.

Elsewhere, Coldplay postponed a concert in Los Angeles on Saturday that was due to be live on streaming service Tidal.

The English rock act, which is promoting an upcoming album, said it made the decision out of respect after the “terrible events in Paris” but would still play a set of old material offline for fans with tickets.