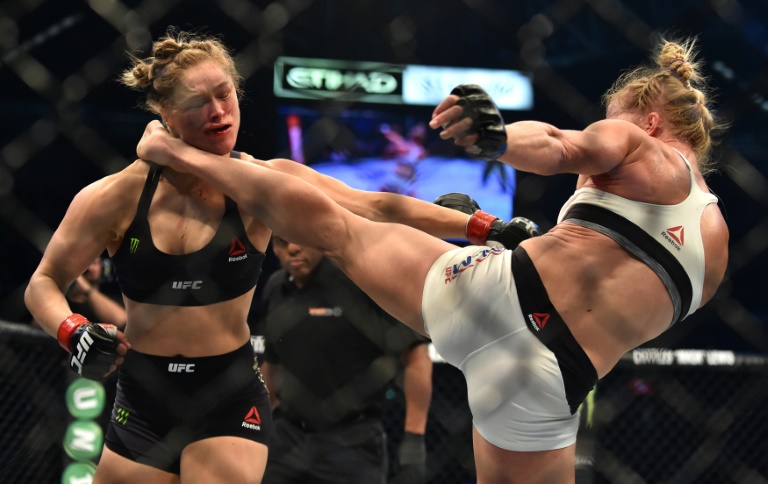 American Holly Holm won the Ultimate Fighting Championship (UFC) bantamweight title after a sensational knockout of champion Ronda Rousey in the second round of their title bout in Melbourne on Sunday.

Holm, 34, a multiple boxing world champion, delivered a head kick 59 seconds into the second round of the bout to send Rousey crashing to the canvas inside Etihad Stadium.

It appeared Rousey was close to unconsciousness as she hit the deck.

Holm followed up with a few strikes before the referee stopped the fight.

Holm had more than held her own in the opening round, landing a number of strong lefts on Rousey.

It was Rousey’s first defeat in 13 bouts and leaves Holm undefeated in the mixed martial arts sport with a 10-0 record.

“I had so much love and support — I thought how could I not do this,” Holm said in the ring.

“I’m trying to take this in, but this is crazy.”

UFC commentator Joe Rogan called it the biggest upset in the history of the sport.

Rousey went into the bout as the most feared female prizefighter on the planet with a series of dynamic knockout victories that earned her comparisons to Mike Tyson’s rise in heavyweight boxing during the 1980s.

The pair had initially been due to fight in Las Vegas on January 2 but the contest was brought forward two months and moved to Australia in a bid to spread Rousey’s appeal to another corner of the globe.