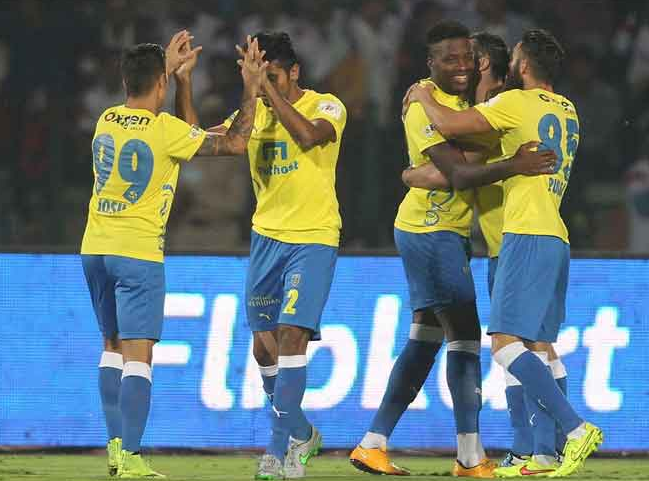 Dagnall struck inside 35 seconds into the match to score the fastest goal of the ISL and then found the target again in the 76th minute in front of the disbelieving 27,000 strong Northeast fans at the Indira Gandhi Stadium.

Cavin Lobo (21st) and Antonio German (75th) scored the other goals for Kerala while Nicolas Velez pulled one back for NorthEast in the added injury time (90+1).

Kerala, who were at the bottom of the eight-team league table before today’s match, jumped one place to seventh by virtue of the win with 11 points to their kitty from 10 matches while Northeast remained on fifth with 13 points from 10 games.

Kerala, the last edition runners-up, had beaten Northeast 3-1 in the first leg in Kochi on October 6 and today’s win was their first victory in four away matches. They kept themselves in the hunt for a place in the play-offs.

The visiting side got off to a dream start as Dagnall gave them the lead when the match was only 35 seconds old — the fastest goal in ISL so far. NorthEast United lost the ball in their own half and Antonio German did well to square it across for Dagnall who slammed it home despite being under pressure from Robin Gurung inside the Northeast box.

NorthEast United were rattled by the early goal but were unlucky not to have got the equaliser in the 14th minute when a free-kick from Simao Sabrosa was headed by Cedric Hengbart from close range but the ball was somehow saved by Kerala goalkeeper Stephen Bywater.