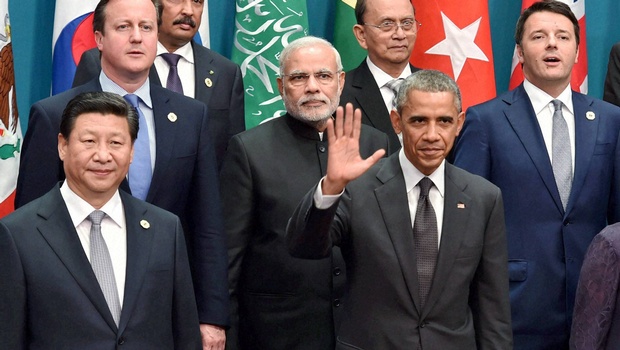 Antalya: Leaders from around the world will come together for the G20 summit on Sunday in the Turkish city of Antalya amid heightened security.

Following the series of attacks in Paris, Turkish government has beefed up security as it deployed 13,000 police officers to maintain security ahead of the summit.

The meeting comes one month after a suspected suicide bombing attack in the capital Ankara that killed over 100 people.

French President Francois Hollande has cancelled his attendance from the Summit in the wake of the Paris attacks.

Prime Minister Modi, who arrived here after a three-day successful visit to the UK, was received by Indian ambassador to Turkey Rahul Kulshreshth among others.

Before leaving for the Summit, Branding the horrific serial attacks in Paris as an attack on humanity, Prime Minister Modi urged the United Nations to ‘define terrorism’ as soon as possible so that the world would know who was aiding terrorism and who was fighting against it.

“What happened yesterday in Paris was not just on the people of France but on humanity and humanitarian thoughts. We need to unite and fight against the forces that threaten humanity. Which is why I urge the United Nation to not waste time anymore and define terrorism immediately,” Prime Minister Modi said after unveiling the statue of philosopher Basaveshwara in London.

He asserted that doing so would aid in identifying those who were backing and sympathising terrorism, and those who were the victims and were fighting against terrorism.

President Hollande held the ISIS responsible for the carnage in Paris and declared three days of mourning in the nation.